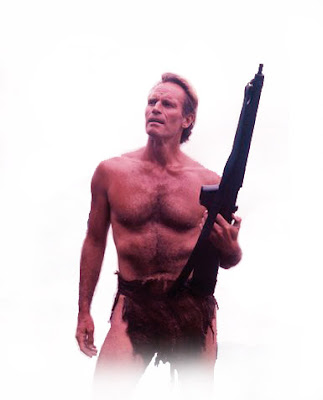 Charlton Heston passed away early this morning at the ripe old age of eighty-four. Disney fans will remember him as the Narrator from the Uber-cheesy fest that was "Armageddon" and quite literally the Voice of the Gods in "Hercules". Personally, his narration was one of only two things about that Michael Bay movie that I enjoyed. He was a movie star, film legend and had a career up on the silver screen that most actors could only dream of today...

To go on and list his film achievements would be too long and to wax on about him would be useless since Harry Knowles over at Ain't It Cool News has posted a great eulogy to the man. Moriarty also chimes in on El Cid here.

My thoughts and prayers go out to his family and friends.
Posted by Honor Hunter at 2:38 PM

Nooooo! Those damn, dirty apes finally got him! Revenge! Revenge, I say!

Don't forget the voice over for Hercules as well...

Soylent Green is Suits! It's Suits I tell you!

He was a right wing wacko and nut. No one should be caring about him. What a horible actor. He couldn't even act that well as the NRA spokeshole that he was in his later years.

Che, if you don't have anything good to say, then please don't say anything. This isn't a forum for your statement. I normally will remove content like this, but I'm leaving it up so others can see what NOT to post in the comments section.

What a cruel way to speak about a man that's just died. You should be ashamed of yourself che.

Che this is the USA , People can take leadership of whatever they chose to believe in the fact that Heston was a champion of NRA rights should have nothing to do with the fact he is a great american actor. I dont support gun rights but I enjoyed him immensly as an actor he will be missed