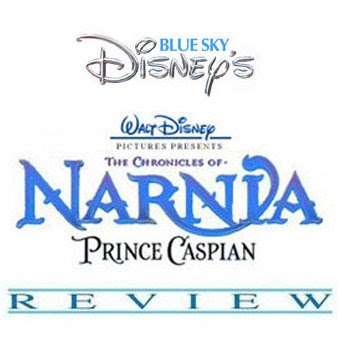 Ok, I know I've been promising this one for a while now and I apologize for the tardiness...

Before I talk about what I thought of "Prince Caspian" I think it would be best to describe my feelings about the first Narnia film, "The Lion, the Witch and the Wardrobe".

I first read C.S. Lewis' classic children's novel when I was just entering high school. Having been a fan of fantasy fiction I picked up a copy in my high school library and read it one day during breaks between classes. It was a wonderful escape from math and science class... but not my history class. I finished it the next day and noticed that there were other books in the series. I decided to find them and read the rest of the series...

And then I got caught up in school, girls, movies, girls, arguing with parents, girls. You get the picture? I never got around to it. I really enjoyed the book, although it wasn't my favorite tale and it did seem to be aimed at an audience a little younger than I was... but it was a good read. And I thought nothing else about it as time went on.

When Disney announced that it would be making the big-screen adaption of the novel I vaguely remembered the book and thought it would be fun to see how they adapted it. Before it came out I finally bought the entire seven book series and reread TLTWATW and disconvered it was very much as I remembered it.

Now when I saw "Prince Caspian", it was an entirely new experience for me having never gotten around to reading it.

So what did I think of the sequel?

I thought it was moderately enjoyable, but not as good as the original that I thought was enjoyable... moderately.

You see, I was never a huge fan of the book and therefore when I saw the first film I wasn't a huge fan of it either. I was entertain for sure, but I always felt that the world of Narnia was "Lord of the Rings-Lite" and never got fully into it like some. I don't mean to offend anyone that are avid fans of this series, but it was just never my favorite form of fantasy. Just a personal preference, really.

My problems with the film begin with the Pevensie siblings. I really wanted to get to know them more and never felt that I did. I was actually interested in how their lives had changed while back from Narnia. The film rushes to get back to the fantasy world and I understand why... it is where the adventure begins, but I found them the most interesting part of this tale and felt that we never got to know them. That's a problem for a film that revolves around them.

As for the star of the title of the film, Prince Caspian, played by Ben Barnes? I have to say I found him pretty. Pretty boring, that is. I never got into his character or wanted to believe in him. And the Spanish accent he and all his fellow Telmarines was very distracting. Had Narnia been ran over by the Spanish? Having not read the book I don't know if this was a part of the story or a creative decision made by director Adamson. Even the armor they wore looked like it had evolved from Spanish Conquistadors so that further made me fell this way.

The battles that take place were interesting and the effects have come a long way since the original film, but I also felt that they were put there to say "See? We've got cool battles that can compete with other fantasy films!" and they didn't seem to advance the story.

And the villain? I felt the nemesis in this second outing was very generic when compared to the Snow Queen in the first one. To go from Tilda Swinton as the White Witch to a generic ruler trying to kill his nephew was underwhelming for sure. The White Witch does make a small cameo, but again, I don't know if this is in the book or just another attempt to inject a better villain. This was my biggest complaint, as I love Disney villains and consider the White Which worthy of such an honor as to be called one... King Miraz was not.

My favorite character other than the siblings was Reepicheep the swashbuckling mouse. He was a fun, entertaining character that I wish I knew more about, but sadly didn't. The film definitely takes a darker turn in order to pull in larger, more adult audiences, but it seems more hollow than the original. I can only hope that the addition of a new director for the third outing will inject new life into the Narnia series the way a new director for the Harry Potter series injected new life into it.

I didn't go in wanting to hate this film and I didn't come out hating it. But I wanted to be transported to a world that was filled with wonder and I was more bored than entertained. If I reviewed films with stars(which I don't), I'd generously give this outing two and a half stars. Generously.

When the next chapter comes out I hope that I'm drawn back into the world of Narnia, because it's a world full of possibilities that "Prince Caspian" failed to show me...

When "The Chronicles of Narnia: The Voyage of the Dawn Treader" comes onto the screen I want the journey to be worth it.

Sorry about the delay in putting up this review, but events and time conspired against me...
Posted by Honor Hunter at 10:47 PM

The first (LWW) was definitely better then the 2nd in the series (PC), but that is how the books are too. PC was much more of a slow process with the children traveling and finding their way back to Aslan and his beliefs. The next 5 books in the series pick it up and show much more adventure and storytelling.

So don't give up hope yet. If done right, I think Voyage of the Dawn Treader could spark a new interest in the series.