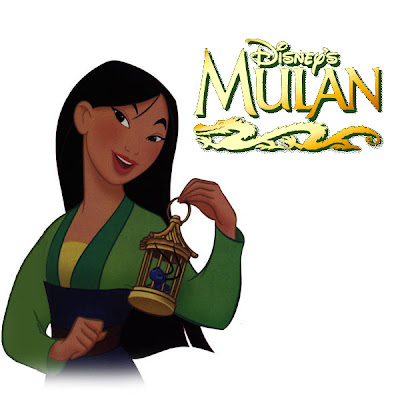 Ten years ago, Walt Disney Feature Animation's thirty-sixth film, "Mulan", premieres at the Hollywood Bowl in Los Angeles. I just watched this again a couple weeks ago... it plays much better than my memory of first seeing it(Is it just me or does Eddie Murphy's Dragon sound eeirily like Donkey from "Shrek"?). The film is one of several that were made in Florida before the box office results convinced Michael Eisner to fold up that operation.
Posted by Honor Hunter at 6:57 AM

Just another one of those "white" Disney Princesses I take it?

They're much funnier when animated in Cali!
And yes, Mushu wasn't any different from Donkey! Freakishly the same!

Just another one of those "white" Disney Princesses I take it?

You couldn't be any more off track even if you tried.

Mulan is not "white". She's Asian, for Pete's sake!

Such a discriminatory attitude will get you nowhere, Anonymous.

I think that was this anonymous' intention. Hence the quotation reference to white. I think he was just trying to add to Honor's statement arguing against those talkbackers saying all Disney Princesses are white.

Notice how he says "nice exclamation point on your last post". I think he was just saying this drove home the point about "white" Princesses.

Mulan is definitely one of my top 3 Disney movies. My husband and I watch it at least twice a year.

"Mulan" was a big disappointment to me. It could have been considerably cooler than it was if the story had stuck more closely to the original Chinese legend. And Mushu...a blatant attempt to imitate the Genie from Aladdin. But Mushu is a failure. He looks like a caterpillar and has a very annoying voice. This movie never really gelled. Too bad, because it had possibilities...

I agree completely with anonymous #2. The story could have been so much better. Mushu never worked for me. I actually like Donkey much better than Mushu, but I think it is more because of the relationship he has with Shrek than his personality. This movie also didn't quite gel with, though I did find it entertaining and enjoyable. I just thought it could have been better.

Actually, Florida had some of their biggest hits during the "lean" years. The last one, Brother Bear made a lot internationally. The closure may have had more to do with the box office results of films made in California.

Mulan is considered one of the princesses... maybe not in title, but her character is. She wasn't a Chinese Princess, but she's a Disney one just like Ariel, Jasmine and all the others.


One of my top five Disney songs of all time... Thank you, Mulan.

I'd love to see Mulan in the Disney Princess line more often. In fact, there's a lot of Asians who like her.

You may be called a racist for saying that..

For the record, I agree totally with you.