King Of The Jungle, Disney Prince? 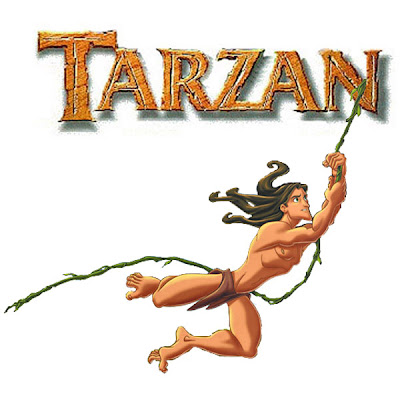 Walt Disney Pictures 37th animated feature premiered on this day in 1999. The Mouse's retelling of Edgar Rice Burrough's story of a white man raised in Africa by apes does well at the box office, but doesn't equal the earlier "Second Golden Age" films.

I've always enjoyed Disney's interpretation of Tarzan, but felt like it was incomplete. There was something missing from it's story and the film's ending felt rushed. Buy hey, that's me... it's actually one of my best friends favorite Disney films. So to each his own... lets celebrate Disney's Tarzan on its 9th aniversary.
Posted by Honor Hunter at 9:23 AM

My information says it was released on the 18th.

Rosie O' Donnell almost single-handedly derailed that film. If they had reduced her speaking role by half it would have significantly improved the movie. As it is, I consider "Tarzan" to be an "almost classic", but as you note it's just not quite up to the level of the "second golden age" films. Despite its flaws, though, I recently re-watched it with my kids and overall it really is quite good.

Thank you for not starting with "On this day," but one other thing -- it's probably better to write in past tense :)

It Premiered at the El Capitan Theater in Hollywood on the 12th. It opened about a week later nationwide...

Yep Rosie O'Donnel ruined Tarzan for me as well, sigh.

I *like* Rosie overall and think she is a fairly talented comedian. That said, here voice is simply WAY too distinctive and obnoxious to really work well as a character--especially as an ape (chimp?)! It was just simply jarring and took you out of the film. And let's not mention to horrible "mohawk" look.

An "ok" film, but for me this and Hercules signaled that things had gone downhill. I though Hunchback, Pocohontas and Mulan were pretty good and worthy of being Disney films. But Tarzan and Hercules were bland, just "ok" films.

I actually think Hercules has its charms. I like that it's a little goofy and I like the music alot. I agree that Mulan is an "almost classic" too. I'd put Mulan and Tarzan on the same level.

On the other hand, I disagree on Pocahontas and Hunchback. While both had some beautiful animation and music (especially Hunchback), they had other severe flaws. Hunchback was just too difficult to adapt into a kid-appropriate Disney film: Frollo sings a big musical number about his lust for Esmerelda??? No thanks. And Pocohontas is just a misguided, PC, revisionist twist of American history. Totally turned me off.

Disney got into this rut where no matter what the story was, there had to be an annoying sidekick with a New York (or otherwise urban) accent. Timon in Lion King, Hugo in Hunchback, Phil in Hercules, Mushu in Mulan, Turk in Tarzan. It was basically the same character in each film. No matter how successful they were at achieving an individual tone or atmosphere for the rest of the film, they had to spoil the mood with a loud crass character who usually used pop references and made bathroom jokes.

Of the above mentioned films, I think Tarzan is probably the strongest (ok with the exception of Lion King, though Tarzan is a much more daring film), but yeah, the ending and the whole Jane Tarzan relationship is kinda rushed. The Tarzan/Kala story is really the heart of the thing and is very touching.

Tarzan is a great movie. and personally speaking has a much more developed plot then most of the movies since Lion King. It also had the best music since Pocahontas. Phil Collins did an amazing job on that end. I don't mind Rosie as Terk. considering I read the original book and loved that, I was delighted with the Disney version.

I love "Tarzan." I think the film has some of the cliches that became standard for traditionally animated animated films of the late '90s. Still, I find "Tarzan" to be a good movie overall, especially when its focus is on Tarzan and Kala. Plus, the movie has gorgeous animation and some beautiful songs.