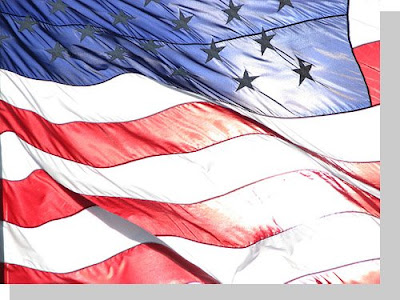 Today is the day we honor the "Stars & Stripes".

It commemorates the adoption of the flag of the United States, which happened that day by resolution of the Second Continental Congress in 1777. In 1916, President Woodrow Wilson issued a proclamation that officially established June 14 as Flag Day; in August 1949, National Flag Day was established by an Act of Congress. It's not a federal holiday because... well, there are enough days we get off don't you think?

When I go to Disneyland they have those ceremonies with the lowering of the flag and I'm reminded of how much Walt loved this country and wanted to honor it. I believe it's appropriate we do the same on this website.
Posted by Honor Hunter at 4:48 AM

Great post, Honor. Amazing how some view any positive reference to any traditional American symbol as a right wing plot. Last I checked, Senator Obama and others on the left commemorated Flag Day today as well.

hope Obama gets the nomination. But I'm disappointed in him for trying to defend himself by declaring that he says the pledge of allegence. He shouldn't lower himself to the Right by pandering that he spouts that tripe a from such a nationalistic propoganda piece that no longer applies to this new global world we live in. I hope that it's just an act he's putting on to bring in religious supporters. It's just too bad most Americans are too stupid that he has to mask his views. You people need to get over that this country is better than others. This country wouldn't be where it was without stealing, raping and plundering the world. I know that. Most people my age know that and soon to be president Obama knows that. Deal with it. Get over your yourself and live in the neo-post colonial world that exists.

Those of us from the "too stupid" majority are thankful for all the Daily Kos buzz words you bring to this blog. Really, "neo-post colonial"? On a Disney blog? That's where you troll to track down right wing plots...on a Disney blog (a very good Disney blog, BTW)?

It seems to me you are proving the suspicion of some on the right who say Senator Obama is a Trojan Horse with much more leftist views than he is letting on. Personally, I don't belief that, as he seems like a mainstream liberal midwestern Democrat...but you are doing a great job of making it seem true that he really has a different perspective and agenda for America (and the "new global world"...which sounds a lot like President G.H.W. Bush's New World Order).

I don't know why Che picks my blog to rant about politics...

I've tried to not discuss politics as it really divides people and this blog is simply about what I love about Walt Disney and the company he founded. I tend to delete post that are offensive, but I think letting Che speak is self explanatory...

It is always easier to see the negatives then the positives. I am just glad some people still care for or country. Keep up the good work Honor.

Thanks for all the great Disney commentary and news, Honor. Terrific blog!

I'm no patriot but the flag ceremony at Disneyland at Disneyland is sadly overlooked by many visitors. You would do well to be in town square at 4:30 PM.