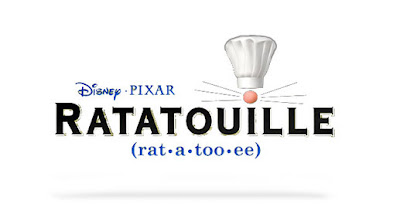 A year ago today, "Ratatouille" was released. This film, directed by Brad Bird(his third film, second for Pixar) was a different direction for the Lamp... it was more mature and less formulaic yet filled with the DNA that is Pixar. A tale of life and living your dreams no matter what others say you should conform to. And you thought it was just a rat that likes to cook?

Many of the negative nabobs were saying this was the one that would bring down Pixar, but they were sadly disappointed as each week it kept grossing more and more money. While not the monster that was "Finding Nemo", the film goes on to out perform "Cars" at the box office. The film goes on to get some of the best reviews of any Pixar film... until "Wall-E" was release last week.
Posted by Honor Hunter at 9:59 AM

Now the question is: will you be following the box office for Wall-E as stringently as you did for Ratatouille, beating back the negative spin again?

No negative spin this time.

Oh, i'm sure the negative naboobs will find something. There was talk of $70m possible this weekend. I'm actually surprised Jim Hill didn't start the week off with an article on "Why did WALL-E not meet expectations?"

If WALL-E does well on July 4th weekend, then the naysayers will be held off for quite a while. If it has a Prince Caspian type drop, then all bets are off.

I hope the American people appreciate what Pixar has done this time and support it.

It's weird that people keep talking about Pixar's "downward trend," because none of the films have done "Finding Nemo" money. But "Finding Nemo" was sort of a surprise mega-blockbuster. That's like saying that Paramount is in trouble for not consistently grossing more and more box office than Titanic.

Plus, as Honor has pointed out time and again with "Ratatouille," a $600 million film is nothing to sneeze at, and neither is a $62, 500 opening weekend for "Wall-E."

Just to caveat, "Ratatouille" outperformed "Cars" at the worldwide box office (by a significant margin), but in the US "Cars" did better. Not a big deal, but just thought I would point that out.

I'm not surprised that Ratatouille beat Cars worldwide but couldn't do it domestically.

I could make a "hurf durf Wal-Mart Nascar Rascal scooter" fat joke right now, but I think the connection is obvious.

Ratatouille was a great film. I remember when I 1st watched it on DVD, I was quite surprised at how good of a film it was.