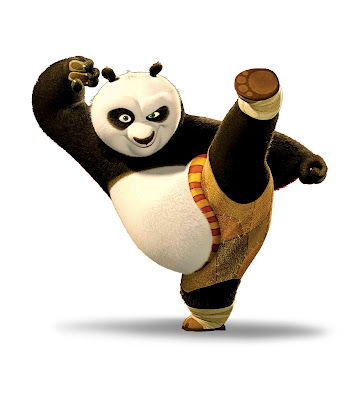 You know when it comes to animated stories, Pixar is the king. They're the rulers, the man on the mountain to knock off. All films(Disney's included) have rightfully been compared to their films. They've not only created a list of successful films, but really entertaining ones as well. I always have said to one of my friends that a bad Pixar film is better than most live-action films that get released anyday. Hands down.

When it comes to CG animation, Pixar is the tops. Dreamworks and Fox tend to be second tier and the other tend to fall into a third tier or lower. I'd say, in my opinion, "Shrek" and "Ice Age" would be second tier, followed by "Madagascar" a little lower with films like "Bee Movie" taking up the bottom ranks. Anything below that on this list wouldn't really be anything I'd even think about seeing.

For the first time, I actually have seen a film, a CG animated film that isn't made by Pixar that's worthy of being a Pixar film. That film is Kung Fu Panda. I loved this film. It's an instant classic. This film is both endearing and heartwarming with a clever, well written script that is lean and fast(the film clocks in at 92 minutes).

Jack Black plays the title character, a big pile of lovable Panda who literally dreams Kung Fu. He's obsessed with it and naturally finds himself in a world where he has no hope of becoming his dream, only dreaming of the dream. This is one of those "follow your heart" films that feels so much like something John Lasseter would have turned out. It's really that good.

The story is equal parts Kung Fu and comedy with neither one hogging the other for screen time. If you're a fan of 70's Martial Arts pictures, then this film will be like a long lost love letter wrapped in some amusingly funny paper of course. This film pays respects to those films while being refreshingly new and contemporary. There's not an ounce of fat on this script/film. What's needed to be shown is, what's not needed is simply not there. My main complaints about "Speed Racer" were in regard to its length and too much exposition. The Wachowski Brothers should use this film as the template by which they make anymore family films.

I remember when I first heard of this and thought of it as just some throwaway film with another gimmicky story like "Over the Hedge" or something even worse. It's not. Jeffrey Katzenber should be commended for putting together this jewel of a creation. It's definitely something I'm going to see again this week and one film I plan on adding to my DVD collection. Personally, I think it's great when a film like this comes out of the blue... Pixar needs competition so it doesn't get lazy and having to live up to this film's high standards is a challenge the Lamp is worthy of achieving. Kung Fu Panda puts Dreamworks Animation into a whole new field that they've never occupied before.

Your turn John Lasseter...
Posted by Honor Hunter at 7:37 PM

Honor, you are reviewing every movie except Disney ones... mah..
We are still waiting for your review of Prince Caspian...
Do you want to be like Jim Hill?
;P

I have to agree with you completely Honor, having just seen Kung Fu Panda, and coming in with low expectations. I was pretty much blown away by it. The story was top notch, the animation and style was brilliant along with a score that stayed true to all of the classic Kung Fu films. Probably one of my favorite animated movies of all time (next to Toy Story and Nemo). I do believe DreamWorks Animation has uped the anti with KFP. I honestly can't wait to see Disney-Pixar's response with Wall-E, which I have been excited for since the first piece of art was released.

How about "when a Dreamworks film is not a piece of ugly shit". You belittle the accomplishment of the filmmakers with that kind of title.

I don't even know what Dreamworks is. You get ugly, garbage films like Shrek and Bee Movie and then something funny and pretty like Kung Fu panda.

Mark Obsourne and John Stevenson and their team made a good movie.

There haven't been that many Disney movies out...

I just haven't had the time or opportunity to first, see the movie and then post my review of it.

The review should be posted this week... sometime.

Great unbiased review, Honor. It seems that the "bar" is getting a little nudge upwards by the folks at DW. Congrats to all!

Thats not an unbiased review he says their film is a pixar film that is not a pixar film just cause it's good. It completely disrespects them. But this guy is all about corporate identities.

"He's obsessed with it and naturally finds himself in a world where he has no hope of becoming his dream, only dreaming of the dream. This is one of those "follow your heart" films that feels so much like something John Lasseter would have turned out. It's really that good. "

Well Lasseter didn't turn it out but Brad Bird did, it's called...Ratatouille. I have notice that when Pixar puts out a movie, something very similar is soon to follow from someone else.

Yes, Soon after A Bugs Life came out, ANTZ came out, then right after Nemo came out, Shark Tale came out.

Ok, folks. I've seen lots of good word on this film--but all say things like "if you're a fan of Martial Arts films, you'll love this."

But, what if you aren't a fan of those films? Not only am I not a fan, I actually really dislike those types of films. (I'm not belittling them--to each his/her own and all). So, would someone who just loves good animated films enjoy this film?

"Soon after A Bugs Life came out, ANTZ came out"

Better check your facts. ANTZ was released more than a month ahead of Bug's Life.

Yes, it was released earlier than "A Bug's Life", but it was put into production after Pixar's film.

I was actually quite disappointed with this movie.

It was good, I guess. Not great though, and certainly not as funny as the trailer had made it seem.

The whole film just came across as contrived (I want to do this, but society is discouraging me) and slap-stick (panda is fat, panda falls down, panda gets hurt, panda is still fat).

It had some good quotes, and the animation was fantastic, but I just don't see why people are fawning over this movie so much.