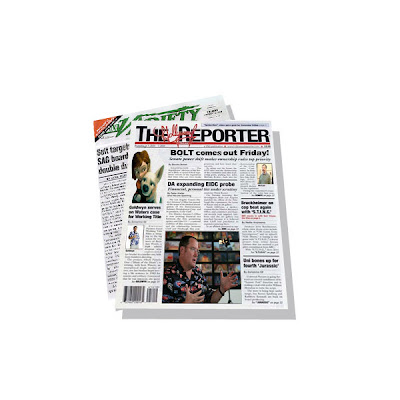 Not that you need any other reviews other than that awesome synopsis by Blue Sky Disney of course... I'll have the official review from BSD up ASAP. Moving on, The Hollywood Reporter has given up their thoughts on the film:

"Although it will never be mistaken for Pixar pedigree, this genial production is a notable step up for Walt Disney Animation Studios and the first to fall under the creative guidance of Pixar's John Lasseter."

The other daily rag, Variety also happened to review the film and seemed to like it, but not as much as the Reporter. The cynical critic had this to say:

"The first inhouse feature from Disney Animation since Pixar guru John Lasseter took over the studio's creative reins, this tale of a canine forced to overcome his superdog complex and learn to become a regular pooch bears some telltale signs of Pixar's trademark smarts, but still looks like a mutt compared to the younger company's customary purebreds."

Oh and if you've been able to stomach the new format of "At The Movies" with hosts Ben and Ben you'll notice their review of Bolt. They loved it, just in case you were wanting to know...

The countdown to Friday continues... Tick, tick, tick.
Posted by Honor Hunter at 12:26 AM

i saw the movie tonight and thought it was absolutley awesome. It was so funny, and some of the visuals were awesome(aka: Vegas shot and looking towards hollywood) This is one of the best films I have seen come from Disney in many years and is very much appereciated and welcomed.

Nice blog...If u want to more information abt mobile phone then go to http://mobilephonnee.blogspot.com

We saw the sneak preview last night and our family loved the film. It was one of the best Disney Feature Animation films we've seen in quite some time.

Not surprising reviews. "Okay, but not as good as Pixar." equals "Don't waste your time if you're over 12." for me.

Honor,
Looking down the WDAS pipeline a bit, I've read where Princess and the Frog and Rapunzel will be musicals. Will King of the Elves be a break into song film as well?

Agreed t, it's his loss. Apparently everything in spokkers life is a loss.

Surprise, surprise, all the early reviews are positive... *rolls eyes*

Great I can't wait to see how these "fix it" guy wreck Rapunzel. I will wait until I see Bolt before I make a final call on the movie. But I'm not feeling confident.
So if Bolt does bomb where does that leave Rapunzel with these 2 in charge?

This is one of those cases where its "good enough". Lots of family movies win this kind of praise because its good enough for kids and only mildly entertaining for adults. How many more talking animal movies do we need?

Box office receipts are not indicators of quality. Heck, look at how much money train wrecks such as Alivn & the Chipmunks or Madagascar made. They were cute, charming, and safe. They fill a void in entertainment designed for the biggest age range. Does that mean they're great films? No way! They're passable.

Bolt in particular is a derivative film. So many pieces of it, I've seen in other movies (some even from the mouse itself). This is not to say that great movies must be all-original, but its really stretching the term "inspired."

I'll leave this film to the moms and dads that chose to see it because its one of the only G-rated options out there. As an adult, I'll suggest everyone rent the various films or TV shows that Bolt culled its plot devices and characters from.

Agreed with the above. I think it'll be a decent movie for kids. But let's be honest, Pixar offerings are more than just "kids' movies". Bolt is not that and Lasseter's involvement doesn't mean much.

Again, good movie, it does what it sets out to do, but the hyperbole like, to paraphrase, "We gotta make this a success!" seems a bit too much. I'd say that for a Wall-E calibur film, not Bolt.

Maybe WDAS wanted to re-start their films with something with a simpler theme. That way they can eventually advance to Pixar level stories.

Spokker, perhaps if you read some of the reviews you'd have noticed that they talked about how it wasn't just for kids and that there are many moments that rise above it being a "Kids Movie"...

Sigh. Having seen it I can tell you that it doesn't pander to just kids and has a few clever moments. Go see it and then judge for yourself. Don't go in expecting it to be on the level of Mermaid or Aladdin or Beast for that matter. But expect the best Disney film in the last decade, which is saying something. Next year is another matter... I have much higher expectations for "Princess".

I will not be seeing Bolt. It does not interest me enough to see it.

I'm going to spend my money on the Wall-E DVD anyway. Either way Disney gets my money. I wish it could only go to Pixar. Oh well :)

It is going to Pixar, Spokker. Pixar is NOW Disney! SHEESH, get it through your head. The same guys you laud over at Pixar are now in charge of the Mouse. You should start seeing a much improved level of films, even if you don't like Bolt it's a vast improvement over the turds that have come out of there the last few years. This is Lasseter's first full, film there. You should be happy that Pixar is essentially in charge of Disney, but all you do is complain. I'm surprised Honor hasn't banned you months, hell, years ago. You are always trying to bring everyone down. Go start some site of your own like: ihatedisney.com. I'm sure you'll find plenty of negative people to follow you there.

Spokker, go see the film before you make generalizations.

In my opinion, Bolt is much better than Wall-e. Wall-e tried to be something and had an amazing 1st act, but the 2nd and 3rd act fell completely apart. In that regard, it's a failure.

Why would you NOT be interedted in seeing it?

"Spokker, go see the film before you make generalizations."

I've said it before, the Chris Sanders version concept art got me excited for American Dog. That stuff was just plain cool. If that was the way the movie looked, I would probably be more interested in seeing it.

Bolt is another example of Disney going for the sure-bet instead of taking a risk. And continuing to develop Chris Sanders' version wasn't that big of a rich considering the guy's track record. Now they lost some talent to another studio. We'll see what happens on that front.

But it's just another example of Disney's overall decline. In the parks, they choose Pixar-themed attractions or Pirate/character makeovers instead of going all out with E-Ticket bonanzas like in DisneySea.

Even DCA's makeover relies heavily on Pixar. Even World of Color, which I think will look cool, is just another Fantasmic! (which, again, is awesome), relying heavily on Disney characters mindless parading around, unlike the serene, surreal, and original BraviSEAmo! (which is brilliant and unlike anything else).

Nah, I'll be interested when Disney released something that doesn't look like a million products before it.

So anyone actually want to guess whats its going to make in its opening weekend im going low ball and saying 43 million The reason Twilight which disney never thought would amount to anything is predicted to do really well.,...........