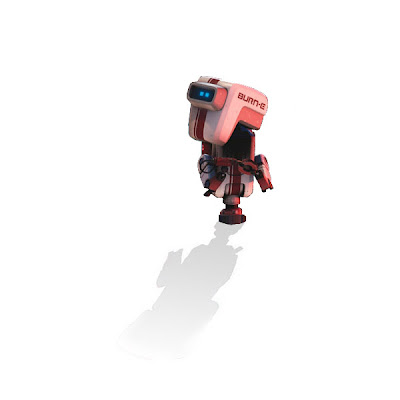 I guess many of you heard a few months ago about the Lamp working on another short for the DVD/Blu-Ray of "Wall-E". To Go with the "Presto" short that accompanied the film theatrically? Well, Disney released shots for "Burn-E," the short that will be included with your purchase from Walt Disney Studios Home Entertainment.

But what most don't realize is that this little pattern is about to be repeated at the Mouse. Remember how Lasseter began putting animated shorts in front of Pixar films as a way of experimenting with their technology and training animators/future directors? To the public this just became an added bonus. Later it was also common for an additional short to be made exclusively for the DVD release of Pixar films, such as "Jack-Jack Attack" on "The Incredibles" DVD.

When John Lasseter became head of Walt Disney Animated Studios, he instituted a new shorts program there as well. We've gotten the taste of the first one last summer with "National Treasure 2" and the release of the great new Goofy short: "How To Hook Up Your Home Theater System." The second short, "Glago's Guest" was going to be in front of "Bolt" next week, but was pulled from that schedule to be placed with another movie. There are several more in the pipeline for future Disney films, but you know what?

The tradition of adding an additional short to the DVD release of Pixar films is also carrying over to Disney Films. Right now, work is being done on an animated short that will be included on the "Bolt" DVD when it's released next year. This is a process that Lasseter plans on carrying through each and every new animated feature. It's great that as time goes by, we're going to be getting a whole new collection of Disney Shorts, both in theaters and at home.

Oh, and if you want to see the sample frames that Disney released then see Planet Pixar's links here.
Posted by Honor Hunter at 12:34 AM

Its a cool concept, but this is going to get expensive. I suspect it will be the first thing to get cut if Disney has a major flop.

Very nice to hear.
Has Glagos Guest been replaced with anything else? Maybe a classic short or anything?

anon #1 - My guess is Disney doesn't look at it as more money they have to spend, it's an investment. Shorts are good training grounds for future directors, to get their feet wet.

As sjwatsi said - is there anything replacing Glago's Guest then? I was looking forward to have shorts in front of all Disney movies from now on.

They're not going to be making enough to put one in front of every Disney film...

That would be about nine shorts a year, which although I'd like it to happen as well isn't in the cards or financially viable right now. The shorts cost about 2 million plus each right now.

Expect two shorts a year. Maybe if they get popular enough three.

Sorry Honor - I meant every animated Disney film. Yes, putting one in front of every Beverly Hills Chihuahua or High School Musical probably is not going to happen.