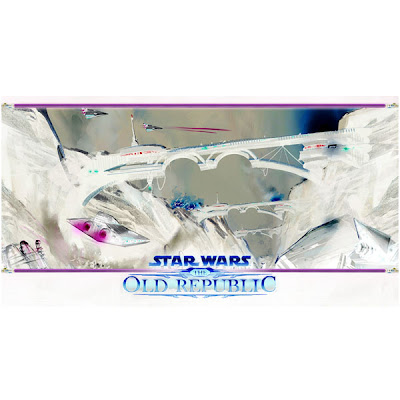 When I first heard about a new Star Wars film back in the late Nineties, I had visions of awesome light saber fights, huge Clone War battles and really epic amazingness. That's not what we got obviously, but it appears that my friends and I aren't the only ones who thought this. There are a couple new Star Wars games coming out soon, both look much better than the Prequels, but one look like it's filled with that amazingness that I imagined a long, long time ago. In fact, it looks like they reached into my mind and pulled out those memories as research. Take a look at BioWare and Lucasarts' "Star Wars: The Old Republic" trailer of the upcoming game and dream of what could have been and might some day be.

Maybe Lucasfilm should let these guys work on a theatrical film, they seem to get it more than the Master does...

Did you ever play BioWare's Stars Wars: Knights of the Old Republic. It was a fantastic RPG, and it had a better story than the prequels.

BTW, Honor, The Last Airbender kicks ass. Both the animated series AND the upcoming movie. It's the NEW Star Wars. Seriously. Check it out.

People said the same thing about some "other" Avatar.

Knight of the Old Republic? I stopped playing it five minutes into playing it, trust me it's awful, lame story and gives us no plot or anything to make us care about the characters. Episodes 4-6 are still the best. Star Wars is damaged beyond repair with the prequels, granted that Knights might have been better than them. In this video, who's fighting who? Where? When? Why? WHy should we care about this, because of lightsabers and flashing lights? All this video does is try to get people impressed by flashing lights and go "hehehe preeeeetttttyyyyy," like the worst movie of all time Avatar. STaff of KIngs is a better story, better than anything Lucas can come up with nowadays.

I now fear for Star Tours 2, that it's already been turned into a mindless spectacle like Avatar, the worst film of all time. What was so great about the original Star Tours, despite its age, was that it felt and looked real. This new CGI thing they're doing just makes it look awful and the fact that they are setting it with the prequels is even worse, why? I already heard some dialouge of Jar Jar Binks' comedy hour, dear lord in heaven, are you serious? The most racist and dumbest character ever created in the history of film is back? The best 3D experience of all time is Pirates of the Caribbean, and always will be, that and KIng Kong before it burned down and The Amazing Adventures of Spider-Man. Kong 360 3D should be interesting but I'm holding my breath.

This is the second video released. Watch the first so you can figure some things out on your own.

*SIGH* Although interesting as a stand alone idea, I am REALLY tired of George Lucas totally rewriting the plot line of the STAR WARS universe every time a new way to make another buck is created. I have stopped my following of STAR WARS after the release of the dreadful Episode 1-3 movies and no longer follow anything done for the now confused franchise. Since when did Alderan become a battle ground when in the original STAR WARS Leia said it was peaceful with no weapons and why would Obi Wan in the same movie be going to Alderan to deliver R2-D2 if it had been devastated as shown in this game? *SIGH*

1). Kids LOVED Episode I. Loved it. My two nieces would rather watch Episode I six times over then watch Episode IV once. The same with a bunch of other kids I used to have to babysit.

1a). Remember Episode IV? Remember how EVERYONE loved it? Well, that's revisionist history. Most critics hated Episode IV and the only demographic that absolutely ate up Episode IV was... You guessed it: Kids. Parents didn't mind taking their kids to see Star Wars because it was "safe action" that didn't have blood, obscenities or nudity. The older the demographic, the less likely you were to "get it." Just like Episode I. Only after it became a hit in theaters did you see everyone else jumping onto the "Star Wars" bandwagon.

1b). People must also remember that the "Summer Blockbuster" began with... You guessed it - Star Wars. Before Star Wars, Summertime was a dumping ground for Hollywood's worst movies under the presumption that people were going on vacation, doing chores outside and didn't want to spend two hours in a theater. Back in a day with no VCRs, no cable television, and Made-for-TV movies that made being waterboarded sound excitingly fun, the choices were few and far between, with Star Wars having little entertainment competition.

2). The dialog sucks no differently from the prequels to the original trilogy. This is what is sometimes referred to as "narrative dialog" in scriptwriting and it was popular back in 1930's all the way through the 1950's. Two very popular serials known for this type of dialog: Buck Rogers and Flash Gordon.

3). The Extended Universe is only canon for the fanbois who can't fathom a world without an official Episode VII - IX. George Lucas has the final say in what happens after Episode VI and before Episode I. Everything else is Lucas-sanctioned fan fiction.

4). What is damaging the franchise is the "baby boom" influx of male teenagers and young adults (born AFTER the original trilogy was in theaters) who think the Sith is "teh b0mb" 'cause they're all so mean and angry and their lightsabers are red and cool stuff like that. All franchises are businesses and have to respond to the marketplace. Therefore, you're seeing (thankfully, beyond the movies) quite a bit of Star Wars merchandise that is "Sith-friendlier" then what the franchise originally envisioned.

However, to be fair, I will give this following point over to those who have a gripe with the franchise:

1). The franchise turned more "technical" (midochlorians, etc.) with the untimely death of an influential writer who was involved in early post-Lucas Star Wars adaptations. Had he lived, there would have been a much stronger "fantasy" influence in both the Extended Universe and even in later drafts of Episodes V and VI (Try to check out the first draft of Episode V - Trippy stuff although, to be fair, some of that stuff deserved to be written out in the later drafts). People interested in this "alternate" Star Wars should study the deeper history of Star Wars literature from 1977-1981. Fascinating stuff and, IMHO, a missed opportunity for Star Wars to elevate itself into "Lord of the Rings" territory.

Everyone can go back to chanting "George Lucas raped my childhood" now.