World Gets In The Game... 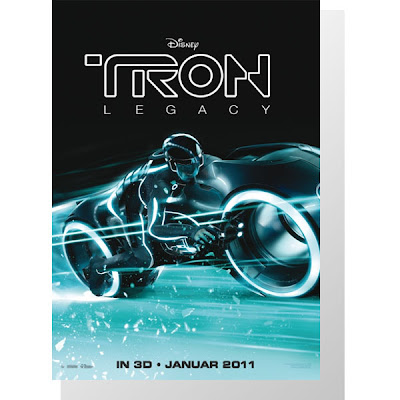 No, the film hasn't been delayed...

I know that this poster says it's January, 2011, but that's because this is an international poster for Walt Disney Pictures' "Tron Legacy."

That's right, all you guys outside America are going to have to wait an entire month after us to see it. I know that you hate that, don't you?

Well, if it's any consolation, it's going to be at least a couple years before we see anything about that new Tron attraction at Disneyland. But from what I hear, the Suits are so happy with what they're seeing on Legacy that they've fast tracked development on a swanky E-Ticket and a few other surprises that could wind up being part of a TL makeover before the next sequel in this Mouse franchise.

But sadly, they won't fast track the film for you...
Posted by Honor Hunter at 11:22 PM

Hey Honor, can your Bothans get me a poster?

So are we likely to see this new ride rolled out at both parks domestically?

Have they really given the green light to a new e-ticket before they see the box office numbers? That would be taking a huge leap. Not that I think TRON won't be a huge success. I think it will be. Would love for TRON to be what jumpstarts DL into getting an updated TL finally.

They're still in "blue sky" phase where ideas are being explored. But they are actually being allowed to think bigger because of the people that have seen it are very happy.

Let's hope this does get greenlit.

There are hardly any comments on all of the Tron stories that get posted unlike others that have dozens. I hear the sound of crickets chirping for Tron. Hope that's not an indicator of interest in the movie. It might be like 1982 all over again. Tron could be DOA.

Remember all the hype before "Watchmen?" It didn't flat out bomb, but it didn't take off either.