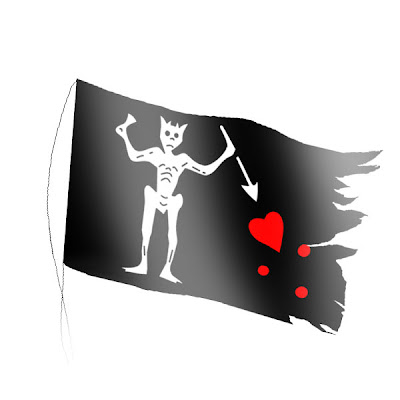 Walt Disney Pictures has released the plot of their fourth Pirate film...

In a press release, the Mouse has given us a little more information about the story of "Pirates of the Caribbean: On Stranger Tides" for fans to mull over till next summer:

"Pirates of the Caribbean: On Stranger Tides" captures the fun, adventure and humor that ignited the hit franchise --this time in Disney Digital 3D(TM). In this action-packed tale of truth, betrayal, youth and demise, Captain Jack Sparrow crosses paths with a woman from his past (Penelope Cruz), and he's not sure if it's love--or if she's a ruthless con artist who's using him to find the fabled Fountain of Youth. When she forces him aboard the Queen Anne's Revenge, the ship of the formidable pirate Blackbeard (Ian McShane), Jack finds himself on an unexpected adventure in which he doesn't know who to fear more: Blackbeard or the woman from his past.

Rush reprises his role as the vengeful Captain Hector Barbossa, and Kevin R. McNally returns as Captain Jack's longtime comrade Joshamee Gibbs. Claflin stars as a stalwart missionary, while Berges-Frisbey is transformed into a mysterious mermaid.

Rob Marshall's first three films, "Chicago," "Memoirs of a Geisha" and "Nine," have been honored with a total of 23 Academy Award(R) nominations. For his work on "Chicago," winner of six Oscars(R) including Best Picture, Marshall received the Director's Guild Award, an Oscar nomination, a Golden Globe Award(R) nomination, a BAFTA nomination The National Board of Review Award and the New York Film Critics Online Award. A six-time Tony Award(R) nominee and George Abbott Award winner, Marshall's extensive work on Broadway includes co-director and choreographer of the worldwide award-winning production of "Cabaret" and director/choreographer of the Broadway revival of "Little Me," along with many others. He also produced, directed and choreographed the NBC television special "Tony Bennett: An American Classic," which earned seven Emmy Awards(R), including three for Marshall, and directed and choreographed Disney/ABC's critically acclaimed movie musical "Annie," which received 12 Emmy nominations with two wins, including Marshall for Outstanding Choreography; it also won the prestigious Peabody Award.

"Pirates of the Caribbean: On Stranger Tides" will film on the islands of Kauai and Oahu, Hawaii, followed by locations and studio work in the United Kingdom and Los Angeles.

What a lame flag. Couldn't you find a better one? I expect more when it comes to artwork on this site, Honor.

I love Pirates of the Caribbean, the rides and the films, all three of them, and I always will. I'm really looking forward to Pirate's 4 and so are my brothers. We just love the franchise. Heck, I'm reading On Stranger Tides and it's really fun. I also just bought Pirate Latitudes from Michael Crichton, which I've started reading. I can't wait to see Ian McShane as Blackbeard, it sounded so cool. I also can't wait to see The Lone Ranger coming out soon.

POTC4 has Ian McShane as Blackbeard (Edward Teach).
The art that Honor used with the story is Blackbeard's flag.

[well, I thought it was clever.]

Bob, it just shows how some idiots on here simply want to bash Honor and nothing more.

Yep. Only one. Just kidding. TS3 was great. If the story is good, why not.

As long as they have good story lines, I really don't care if they're sequels or not. I'm personally looking forward to all of them, as well as Tron:Legacy.

You have no idea how much I want to like the Pirates franchise. I loved the original ride and thought the first film was one of Disney's best in decades. Parts two and three were such a disappointment. Somehow, though, I'm still holding out hope for this one. I'm hoping that Elliott and Rossio remember what made #1 and the others crap, and that they're helped along by not having the bogged down mythology and by working from decent source material.

Incidentally, going back to the post on the new Pirates game, I have a great plan for making the Pirates franchise less reliant on Jack Sparrow: restore the original ride. There's your timeless thing right there.

I'm disappointed. I had originally been excited when I read that they had bought the rights to Tim Powers book. But it looks like they are not keeping my favorite bits.

Well, the main reason the book was bought, was so that they wouldn't be sued by Powers. The writers idea involved Blackbeard and the Fountain of Youth, two things that play heavily in the novel. If they went forward, it was believed that litigation could result. This purchase meant they could use any of the ideas outright and not have to worry about this.

Oh please, NO more Ted Elliott & Terry Rossio. Terrible "writers, "and complete blowhards. Pirates 2 & 3 showed what a random blip the first movie was, and what hacks they really are.