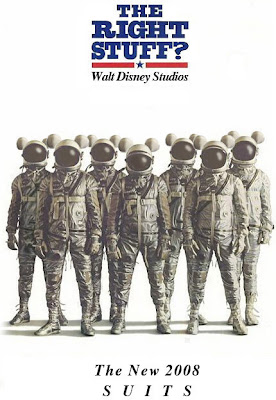 Over the last few years the Mouse has had a good stretch at the box office. Between the Pirate movies, the Pixar films and several other smaller surprises the Disney brand, along with its Touchstone division to a lesser degree has enjoyed being at the top or near the top in terms of success and growth.

One wonders if this streak will continue or could the film division be just lucky? As in everything else, decisions are made at the top and head down hill. Success or failure comes from those that make the decisions affecting the whole of the company... that's why they make the big bucks of course. So in seeing how the near and far end future of the Mouse is concerned we'll have to take a look at the top. The main people running the Walt Disney Studios. That would start first and foremost with the Chairman of the company, Dick Cook.

Cook became the top exec at Walt Disney Studios in 2002, after Eisner named him to succeed Peter Schneider the former head of the studios. Here's an example(one of the few) of Eisner actually making a good decision, btw. Of note, Cook is the only high level executive to have worked for Disney since Eisner took over in 1984.

He's one of the most likable Suits in Hollywood today... this is a great asset in a town built on relationships. Johnny Depp, Nicholas Cage and many others regard Cook as a friendly bridge between management and talent. He's someone that can get an actor to look at something who normally wouldn't. And besides all this, he's something that you don't normally see in Hollywood. A truly nice guy.

Now right beneath him we have an enigma that is forming...

Oren Aviv, Walt Disney Motion Pictures Group President who succeeded Nina Jacobson in the "Big Cut" that happened in July of 2006. He's been moving to increase the Disney Brand of films, which is quite the opposite of what Eisner did back in the mid 80's(which Eisner was right to do back then, btw). The Touchstone Brand will still be active, but the focus will be on more family movies and to associate the Disney label with better quality movies. This might puzzle some, because many Disney Geeks will recall one of Aviv's famous(or infamous) statements about the kind of films he's looking to make:

I know, I know... just like you, that statement makes the hair on the back of my head raise up. That movie was nothing more than a glorified rip-off of "Kindergarden Cop" and an average one at that. But to be fair to Mr. Aviv, I think it may have been taken out of context. I have a feeling I know what he was trying to say, even though it probably didn't come across so well. The movies he's wanting to get into production are supposed to reach a certain audience and creating films that have a generational crossover appeal(especially internationally), are what he wants to market. Now many of the Disney faithful will find that this could include those dreaded "tween" movies that we don't care for. You know, the "Hannah Montana/Miley Cyrus: Best of Both Worlds Concert Tour", "High School Musical 3: Senior Year" and other things that have keep many a Disney fan from even venturing into clicking the remote to the Disney Channel for fear of running into "Raven" or "The Suite Life". While I agree that it ain't my cup of tea, I can understand why the Mouse wants to get this group of teens. Aviv understands this too. I tend to try and brush off this as the modern day equivalent of "The Absent Minded Professor", "That Darn Cat" or "The Computer Wore Tennis Shoes". While movies like the "Pirates of the Caribbean" series or the "Narnia" series are representative of something along the line of "20,000 Leagues Under The Sea" or "Treasure Island". I'm sure back in the 50's many an adult audience would have rather seen Marilyn Monroe in "Some Like It Hot" or another film that these films for their bobby-sox teenager. Things change and sometimes they don't...

Aviv understands the Disney style of movies it seems from some of the projects that have been greenlit over the past year or so. We have "Bedtime Stories", "Beverly Hills Chihuahua"(think "That Darn Cat"... hopefully), "The Chronicles of Narnia" Prince Caspian", and others set for the calendar year. Coming up next year are "When In Rome", "Fraggle Rock" and "Old Dogs", "A Christmas Carol" and a couple others. Not everything will fit my taste, but that's not his job. It's to fit the audience, both here in America and the world. And if he doesn't do that, well he won't be there long. We're about to find out as movies that are part of his philosophy begin taking up the majority of the Mouse's pipeline starting this summer. If his projects flop over the next year and a half then we'll know his taste is not the audiences and he'll be typing up one of those farewell letters that Suits tend to issue when they want to spend more time with their family.

Now across from the Walt Disney Studios lot in temporary headquarters of Walt Disney Animation Studios known as "The Hat Building" sits that figure that blurs the line between Suit and Creative. John Lasseter, the Chief Creative Officer of Walt Disney Animation Studios and Pixar Animation Studios... essentially the head of almost anything animated at the Mouse. Now, he's an interesting hybrid, because as well as heading both of these animated units you, he'll be involved in live-action for the Pixar unit over the next few years with the co-production with Warner of "1906" and then Pixar's own "Princess of Mars" films. Should the animation unit in Burbank be blessed by his box office abilities at the Lamp and then the live action works succeed they you'll see more and more of his power seep over to Walt Disney Pictures. Aviv will have a powerful shadow looming over his desk. But come this fall we'll finally get to see the freshman work of Lasseter's tenure at Disney when "Bolt" comes to theaters this November. The reign of the "Mousetro" really starts kicking up dust next year when "The Princess and the Frog" debuts though... many inside the walls of TeamDisney are said to be very excited about that film and "Rapunzel" the following year. There are a couple of projects that could get the greenlit to move into story later this year as one already has moved into this position to follow Glen Keane's co-directorial debut. Lasseter's the monkey in the wrench, fly in the ointment that has the unknown quantity.

We'll find soon as to how things are going. By the end of this year the new leadership at Disney will have weathered it's first test of fire. If they survive past next year is something no one in Hollywood can know... because the life expectancy of a Suit in Tinsel Town is usually very short. Half a decade is an eternity for most. Dick Cook has already survived that... Oren Aviv is a question about to be answered... and John Lasseter, well he doesn't have to worry about problems for a while since he has the backing of that guy in Cupertino. He's got at least four or five years before he has to worry and that is only if just about everything he touches turns to "FLOP!". That ain't likely to happen.

This is a Disney Fairy Tale we're talking about, after all...
Posted by Honor Hunter at 7:38 AM

Wonderful post!!!!Great!!
I understand the point of view of Aviv. He wants to make movies that (according ot him) people across the world want to see (and less they cost, better it is). This kind of movie can generate money at the boxoffice... But only NOW. I don't think that in the future people will remember (and will buy) movies like the pacifier. And we know that Disney Home Entertainment will release (and make money) forever from evergreen classics like Snow White and the Little Mermaid.
So, Could exist a trade-off?

If you look at future Disney movies you will see very few thrillers, sci-fictions, romances, kolossals, crimes. NO HORROR, or psycological thrillers (Shyamalan where art thou? O yep, I remember... The Lady in the Water affair...By the way, I think that his next movie (for Fox) "The Happening" will rock!!!!!!!!!!!!!!!!).
I want that the Disney catalogue will be various!!!
NOT ONLY FAMILY MOVIES!!!!!!!!!

Expecially now that we have ONLY 12 movies a year!!!!
In the past the situation was very different. Disney released, how much?, 25-30 movies per year!!!
In this case I accept family movies. But they must be joint with other kind of movies.

Awesome post, Honor. That's why I like coming here. Your perceptions are right on the money. Thanks alot.

This Orin Aviv guy seems to be going in the wrong direction IMO. I want Disney to avoid making movies like The Pacifier. I know there is the occasional need for the family comedy, but let's face it, they mostly suck. I want to see Disney divides it's efforts between animated masterpieces (Bambi, Lion King), family action-adventure movies like Indiana Jones, Star Wars, and Pirates of the Carribean (I know Disney didn't make the first two I listed), and some live action movies along the line of Enchanted and Who Framed Roger Rabbit?.

"I want to see Disney divides it's efforts between animated masterpieces (Bambi, Lion King), family action-adventure movies like Indiana Jones, Star Wars, and Pirates of the Carribean (I know Disney didn't make the first two I listed), and some live action movies along the line of Enchanted and Who Framed Roger Rabbit?."