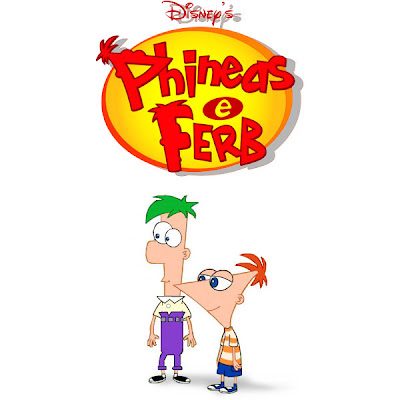 I know I've not been happy with very much of the programing on the Disney Channel lately...

If you've read this blog for a while, I'm sure you know that. But I'm actually going to take this opportunity to say I was wrong... a bit. To say that I've actually found something on that channel that I've discovered isn't so bad. Something that I was surprised to find was entertaining. It's still not my cup of tea, but I have actually seen a few of the "Phineas and Ferb" episodes in the last few weeks and enjoyed them. I thought they were quite clever. Maybe it's just me, maybe it's that all the shows that surround it seem so horribly bad that it seems so much better than the rest, but I found myself not hitting the remote button to change the channel.

I'm sure you know how I've talked about how I wish the channel actually showed animation and things that are what I call "Disney". I know, I know, they're not aiming for me and my demographic, but I always felt the channel should've been like Disney films, parks and other things. You know? Something that we can all watch together... that was something that set Walt Disney apart from so many others. I mean, I wasn't a fan of "My Friends Tigger and Pooh" because it messed with the original mythology... and I say that with deep respect for the artist that animated it, but it was an experiment in trying to take the characters into markets that the Mouse hadn't already mined. That said, it was a plan devised by Suits that was unfortunately(or fortunately depending on your perspective) destined to fail. Now if we can just get some shows on the Disney Channel that have good compelling stories to go along with the animation I might watch more of it.

More shows like Phineas and Ferb...
Posted by Honor Hunter at 12:01 AM

The Disney Channel is on constantly in my house. I'm keeping my XM satellite radio almost exclusively for Disney Radio, which is basically the audio version of The Disney Channel, playing songs from Camp Rock and Hannah Montana and the various Disney recording efforts of other Disney channel stars . . .

And that's not because of me. My youngest (3) loves the Mickey Mouse Club House. And the Winnie the Pooh Super-Slueths thing. While it's not my Mickey, and not my Pooh, she loves it--and that's not a bad thing, in terms of marketing or communicating the brand to youngsters.

The other Disney Channel stuff, especially products like Hannah Montanna, have been brilliant. I believe the soundtrack to High School Musical and the first Hannah Montana CD both went platinum without any actual radio airplay, outside of Radio Disney. Hannah Montanna alone has become a billion dollar industry, and, during the show, Disney can pimp it's other properties.

The quality of the show may not be what we, as adults, would like to see. But my 10.8 year old loves Hannah Montanna and the Suite Life. And loves Camp Rock and the High School Musical stuf. She'd take the High School Musical concert movie over Wall*E. Hannah Montana would win over Finding Nemo, any day of the week. These are powerful properties with the tween and sub-tween set.

From a marketing and business standpoint, was Disney has done with the Disney Channel is brilliant.

Much better, all around, than strategies like the cheapquels.

With all the competition for attention these days, I know my 3 year old loves Mickey Mouse and Pooh much more, and is much more familiar with them, if Disney didn't offer their familiar characters in scenarios patterned after Dora the Explorer and Blues Clues.

I'm glad you like Phineas and Ferb, but the real brilliance of the Disney Channel is in marketing and branding, and building huge interest in their properties in age groups from toddlers to teens in an era with much more competition for their entertainment dollars.

And, Disney always wanted to entertain kids. And even if I don't care for The Suite Life of Zach and Cody, my daughter loves it. And Hannah Montana. Loves it. High School Musical? Best film ever. Camp Rock? Very close.

Disney Channel is a channel that caters to kids, and is producing what that particular market thinks of as excellent product, and would rate much higher than a Snow White or a Sleeping Beauty. In other words, they know what they're doing. And they are doing it very, very well.

I've never seen Phineas and Ferb, but reading around on other animation blogs it seems that this is a very popular show among many demographics. So its not just you. This apparently is a pretty good show.

The first time I saw the ad for Phineas and Ferb I cringed. I thought oh no another stupid cartoon, boy was I wrong! We love Phineas and Ferb and how Ferb only talks when necessary and then says something silly or enlightening not really related! All three of my kids my 14 year old sometimes poopy teenage boy likes this show too. One homerun cartoon for the mouse.

If I was going to slam something it would be Camp Rock. I think they tried too hard to make it as big of a success as the HSM franchise. However my 9 year old daughter loves that silly movie.

I do believe those channels are more about marketing and making money than showing quality programming that everyone loves but Phineas and Ferb is as good as we all say. Check it out more often :)

Stopped watching The Disney Channel when they discontinued Vault Disney.

I'm pretty sure that today's children's programming makes them retarded. Give me Looney Tunes any day.

I am glad others like Phineas and Ferb. An original and up lifting show. It hits all the right notes. Sadly most shows don't on that channel. I miss the days of Ducktales and Rescue Rangers when animated shows actually had plots and storylines and characters you could fall in love with or relate to. Most shows are given to kids thinking they are a lot stupider then they are. Even Kim Poissble was amazing compared to most shows. All way as long as someone is watching I guess.

Phineas and Ferb is interesting in that it's Disney Channel's first storyboard driven show. There are no scripts, so it's up to the board artists to write the show visually with storyboards. It's a much more artist driven show (the creators Dan Povenmire and Jeff "Swampy" Marsh have been working in animation forever), and it's reflected in the show's quality.

I like Phineas and Ferb. PERRY THE PLATYPUS! SUPER AWESOME!!!

Oh man, I love that show! Its clever and silly. Some of the people who worked on the series also worked on THE MARVELOUS MISADVENTURES OF FLAPJACK, another cartoon I love. Gotta love the subplots with the platypus and the mad scientist!

Its only been recently that I've been getting back to watching cartoons on TV. They just haven't been good since the the 90s, until FLAPJACK and P&F came along!