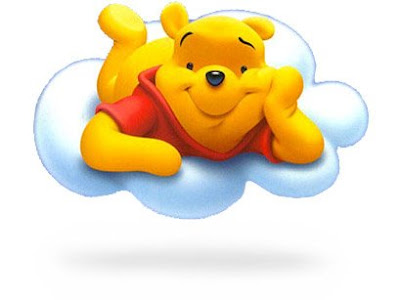 Eight years ago today, Tokyo Disneyland opened up "Pooh's Honey Hut" and became the most popular ride in the park.

Many of you have heard me talk about this ride and yes, it is as amazing as I say it is. While Disneyland got "The Many Adventures of Winnie the Pooh" a few years later... the 30 million they spent on ours really does become painfully evident when you get a look at the Japanese version. Even worse when you ride it, considering the concepts for this were from the original blue sky phase for the ride we were supposed to get state-side.

Anyways, enough crying over spilt milk. The ride in Tokyo is a much more layered ride of what we have here where you ride his large trackless honey pots that are guided by GPS as you go through the story of Pooh and become immersed in the world A.A. Milne created. If you ever go to the Tokyo Disneyland Resort, this is the attraction to see.

Once you leave the ride, you'll dislike Michael Eisner even more knowing what we were robbed of.
Posted by Honor Hunter at 2:52 AM

The same system is propably going to be used in the comming Ratatouille-darkride in Walt Disney Studios Park at DLRP. Now we're talkin!!! :-)

ive seen the ride on youtube, it looks much better

Not the Tokyo version, but one that's similar...

I have never been to the Tokyo resort, but this ride definitely looks like the best ride there!

This is a brilliant ride, and unfortunately i rode the one in HK Disney a few years later, and was so bitterly disappointed that it was not the same ride.. it wasn't even a cheap imitation, it was just so very lame. Can't wait to go back to Tokyo one day and ride it again.

Honor Hunter thinks TDL's Poohs Honey Hunt is amazing. What else is new.

Does Hong Kong have Anaheim's version?

I am only greatful that Eisner is gone. He can do no more damage to the parks. Wow was he really lucky that the Pixar partnership was a successful.

"Does Hong Kong have Anaheim's version?"

No, Hong Kong has Orlando's version.

What's the difference? Anaheim and Orlando both appear to be average C tickets. Comparisions?

I've heard these ride vehicles are navigated using GPS. But even the best GPS systems are only accurate to within a few feet and I would expect that this ride needs to be more precise. Is it true GPS? Or is it a local positioning system - which could be much more accurate?

Ah, it is disappointing for sure...but I can't dislike Eisner. It was under his watch that we got the wonderful Splash Mountain.

I know Honor has done a good job mentioning the positive under his watch in the past, so I'm not posting a response to him--more just a reminder that a lot of good things happened to.

His second would be when most of what we complain about happened.

i'm still miffed that disneyland did not get the WTP flume ride depicted in the concept art.

Concept art depicts what could be.

Budgets reflect what you end up with...

I believe the ride is older than 7 years. I was there 8 years ago and it had been running a while. The ride is amazing. When the Imagineers are given the money to bring there ideas to life, magic happens. You see this alot at the Tokyo parks, from the parades to the shows to the attractions. They are very big on their level of "show" and take pride in providing the highest quality to their guests. Even the merchandising is incredible. I try to explain it to my friends here in the states, as they think all the parks around the world are the same, just with different languages. It is my hope that at some point in their lives everyone gets to visit the Tokyo Disney Resort, or even better that the parks in the states rise to the standard that has been set in Japan.