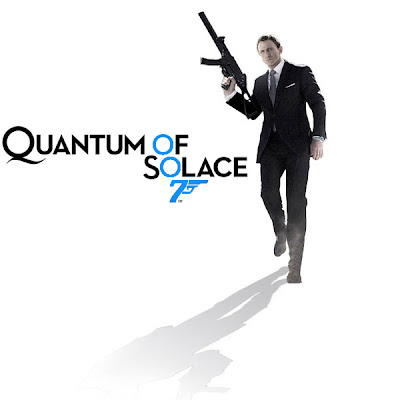 It's been a busy week and I've been stuck down here in Blue Sky's secret headquarters not able to go out and do much. Staring at the ocean from my window has been my only solace...

Nice pun, huh? Actually it's been a bit torturous to look outside and see the trees blowing as the waves crash along the beach and know that I've got deadlines to meet and can't go out. Well, Friday night I took a break and went out to see the new Bond flick: "Quantum of Solace" with a couple friends at the Bella Terra. I was very excited to see Daniel Craig's next outing at the British Secret Agent with a license to kill. Especially since "Casino Royale" was probably one of my top two films of 2006. I was expecting a good film, but not as good as the last one which was the best I figured I could hope for. My worst fear was that the film would fall on its face and come nowhere near the level of the first outing by Craig...

When the lights went down I was excited not only to see the new film, but the new "Star Trek" trailer that was going to be placed exclusively in front of it. Imagine to my surprise when no such trailer appeared. I was rather upset when the credits for QOS started rolling as I'd been waiting to see that Paramount logo and Abrams reinvention of Shat's portrayal of a pop-culture icon(the trailer will officially be online Monday, btw). After a few moments the frustration left me as Bond's new adventure filled the screen.

And then it began...

Not the sequel to Casino Royale, but actually the second half. It really does feel like the conclusion to the story we watched unfold two years ago, not really a new film in the Bond series. They could have actually labeled this "Casino Royale Part 2" because it is such an extension of that film. A reviewing of that film before going to see this latest outing is the best way to see this film come to think of it. Having said that, were you to ask me to choose between this one and Casino, I'd pick that one. This film is good, but not as good as that first one with Bond. Is it an inferior film then? No, but there is a visceral newness to Casino that was missing here. We now know Craig as Bond and that element of surprise is missing. The development of James Bond as the debonair, sophisticated and charming word spy continues to evolve and it's one of the most interesting parts of this new series of films. Craig is still not the character we envision when we conjure up images of a spy in a tuxedo, but we can see he's well on his way. It's an interesting journey to follow him as he becomes one of the landmarks of popular film and literature from the last half of the Twentieth Century.

Picking up literally minutes after the close of the last film, QOS is essentially a chase film powered by Bond's desire for revenge at the loss of his fleeting love, Vesper. It's an intense, brutal collection of car chases, motorcycle chases, on foot chases toward the ultimate goal of Bond redeeming his soul and extinguishing the black pit that lies in his heart. Vesper seems to be the only one of his conquest that somehow touched him to that level and being deprived of her has created the need to punish everyone and anyone that caused this. The thing about this film that is also a part of Casino is the deeply personal nature of the story and Bond's motivation. It seems in the Twenty-First Century, "For Queen and Country" are not enough for a secret mission. Saving the world isn't paramount. Saving ones own soul is...

There have been those that have said this film is too close to the Bourne series and is missing the trademark character traits that made this film series what it is. I say that they're right... and wrong.

He's not the man yet who drinks those shaken martinis. He not the man with the cool, calm exterior than takes care of a problem with a glib sentence while keeping his gun holstered. By the conclusion of this film we begin to see the 00 Agent we've come to know and love. I believe it's taken him two movies to get there, but if you watch as the credits roll he's there, emerging from beneath those piercing blue eyes and cruel good looks. When the third film comes out in 2011, I expect to see a character that is closer to what we've seen in the past. It's been fascinating watching him come all this way. Sean Connery is still my favorite Bond, but Daniel Craig is a close, close second. He's far better, in my opinion, that all the rest. Having read the original novels, I can tell you he's closer to the description than the rest. My only complaint, and it's really not a complaint but more of an expectation for the next film, is the villain. The bad guy in this is Mr. Green, a very smarmy character that's sort of an eco-terrorist certainly worthy of the list of Bond Baddies... but I long for the kind of evil incarnate that I saw in the Heath Ledger's Joker earlier this year. Daniel Craig's Bond needs his own Blofeld to battle. He's got his new "SPECTRE" with the "QUANTUM" organization. Hopefully in the third film with Craig(he's signed for a few more) we will get a villain as deliciously bad as his portrayal is good.

This film is a great ending for the beginning that is the new Bond. I look forward to the next chapter and those joyous words on the screen before the lights in the theater went up, "James Bond will return..."
Posted by Honor Hunter at 8:51 AM

I still don't understand the hate that is going towards this movie. Yes, it isn't quite as amazing as Casino Royale is, but it is still pretty damn good.

And you can't knock the awesomeness that was the Bolivian Taxi Ride. Bond's quote in the second hotel is by far my favorite line in any Bond movie.

Hi, for me it is Un-Bond like that 007 would be so cut up about his dead sidekick.Sean had that somewhat mysoginist unconcern about his murdered lovers.Also there isn't the imagination of earlier bond films and a host of bizarre evil dudes,my favourite being Mr Kid.I doubt whether I'll go to the cinema to watch it.Thanks for your review,very interesting...Tom Australia

You've never read "On her Majesty's Secret Service," I take it? Bond gets very upset about his murdered lover. Especially since he married her. Craig plays the character very close to what Fleming wrote in the books. Connery is still my favorite, but the current one is the closest to the literary one.

I thought "Quantum Of Solace" was a great addition to the James Bond series. I appreciated the wit, and I felt like the film went further to establish Daniel Craig as 007. I did wish for a more compelling villain than the Euro-hipster Mr. Greene. (And what was up with his sidekick/valet/manservant?) Oh well...all it all it was a good film.

OK Blank Stare,that's a valid point you made.I guess like yourself it is hard to pass by the legendary iconic quality of Sean Connery but consider this; has the world passed it's zenith in terms of movies compared with the 1960's and 1970's.That period was an amazing watershed time for pop culture.....Thanks Tom Hardy Australia P.S. Thanks for your reply