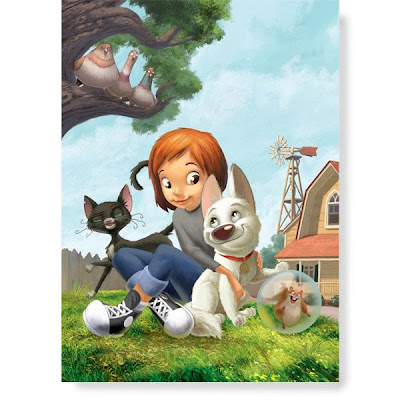 It's taken longer to get there and is still a disappointment more than Lasseter and the Suits at the Mouse would like to admit, but "Bolt" passed the two hundred million dollar mark yesterday(that's 200,000,000 for you UCLA graduates!).

The film has had a steady growth rate overseas and will wind up a modest hit, but a hit none the less. The little white dog is a step in the right direction for Disney animation and those that didn't go and see it in theaters will have a chance to realize they made a mistake in March. This was the beginning of Disney rebuilding its reputation and that takes time... part two will be the DVD release and the next step will be that little animated film coming out on Christmas day...

Artwork by Brooks Campbell.
Posted by Honor Hunter at 12:48 AM

Well, THE GREAT MOUSE DETECTIVE underperformed as well. And that film was pretty important for the studio, once upon a time.

I was able to see this at the El Capitan in Hollywood - I immediately made everyone I know go out and see it at the theatres. Hopefully the DVD will have big sales; this was a fantastic film and deserves the attention.

I can only recommend go and try to see this movie in 3D, it is glorious! I think I will have to go see it again, and that means something.