This Christmas Prepare To Go Back In Time... 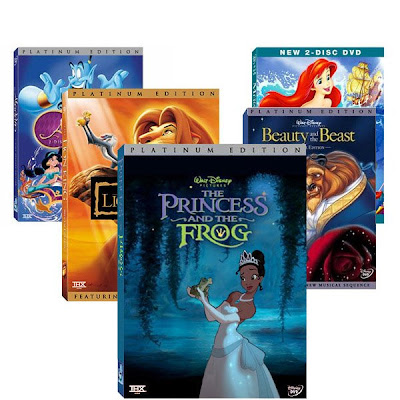 When you leave the theater after seeing Disney's new animated release this Christmas, the first thing you're going to do is come home and start looking through your DVD collection. You're going to swear that you've seen this before... in a good way, I mean. It's going to seem like a wonderful film that you could have sworn must have been nestled between "The Lion King" and "Pocahontas" that just happened to get lost in the marketing. Perhaps you were out of the country during its release or perhaps you weren't interested in Disney films back then and must have forgotten about it.

That's the feeling you'll get.

Or at least that's what I'm getting the vibe for with all the feedback I'm getting. I've been hearing a lot of great things coming out about "The Princess and the Frog," the first hand drawn animated movie from the Mouse in over half a decade. The overwhelming amount of compliments that it gets is that it feels like a throwback to the 90's. In terms of feel, the animation quality and most of all... the story.

There's a lot riding on this film. While "Bolt" was the first film to have Lasseter's complete attention since the Mouse purchased the Lamp, it's this film that will have critics and audiences alike taking a much closer look at Disney's animated future. And we're not just talking animation, but what types of animation... as in CG or hand drawn. The Suits up in Burbank are going to be watching this one closely and if you love hand drawn, then you'd better go see it a lot. Over and over... cause this one is the test case. This one is the one that's supposed to prove hand drawn has merit. Five years after Eisner released the last 2D animated film from the Disney Studio comes an example of what can be done if you don't have bean counters deciding plot details. This time there will be no excuse. The film will live or die based on the appeal of how good the story is. I have no doubt that the art and design will be top notch. The story will be what animation fans will judge and if it's good they'll go and see it again and again... and if you like it, then that's what I suggest you do. Because if you want Disney to have another hand drawn film in 2012 or 2013 then that's what it'll take.

So come Christmas, when you come out from seeing this little throwback to the 90's... if you like it then get back in line. Let's all show Eisner how wrong he was for closing shop on hand drawn animation and selling all those wonderful animation desks.

Any word on them possibly moving the release date from Christmas? As great as it might be, it is potentially suicide to go up against Alvin and the Chipmunks 2.


But I will go see this film, and with a large group opening weekend.

I personally cannot wait to see this wonderful film!

Unfortunately, sequels sell regardless of quality, especially when the first movie did really well.

Don't forget, the first Chipmunks movie made more than $210 million, more than Ratatouille made.

I am also a little worried about the Alvin threat. It also seems that Christmas only gives them a limited window for box office opportunity. - Also, I was reading on one of the animation sites about how important this film is for hand-drawn. They asked one Dis. exec. if this might be the last one if it doesn't perform well. They completely denied that and said that they now have pipelines for both traditional and CG animated films.

If "Alvin and the Chipmunks 2" is what Disney has to fear then they've already lost...

I think Christmas is the perfect time to release a new Disney animated film. And the Mouse plans on doing so for the next three films at least. Also, I believe releasing it at Christmas instead of before Thanksgiving is a good thing. It puts much more emphasis on what an "event" film this is supposed to be...

As ALL Disney animated fair should be.

Christmas is a short window. I'd feel a lot better if this was coming out on thanksgiving.

Hey Honor Hunter, been reading your blog now for a few weeks. You always write such positive, great posts! Any news on marketing plans for the Princess? When will we actually see a poster? Or a trailer for that matter? I'm so glad that you posted about it once again.

Oh and while I agree that changing the date because of Alvin and the Chipmunks 2 might look cowardly, I don't think we should underestimate a sequel and children who don't know any better. I'm sure the little girls will want to see Princess but the boys won't...as least not as much. I think a Thanksgiving release would be cool. It's still an event. Or it could even go up against Avatar, no family would see that together.

Altough a Christmas release might be interesting for the US, it would mean because of the dubbing process, the rest of the world won't be getting Disney movies at Christmas time but in March, April, or even worse, at the beginning of the summer holidays. Even with Wall•E it took almost half a year (October) untill it was released here in Austria, the DVD just came out this month!

I'm rooting for this to succeed. But I hope that firefly isn't as obnoxious in the film as he is in the trailer...

Thanks for not answering anyone.