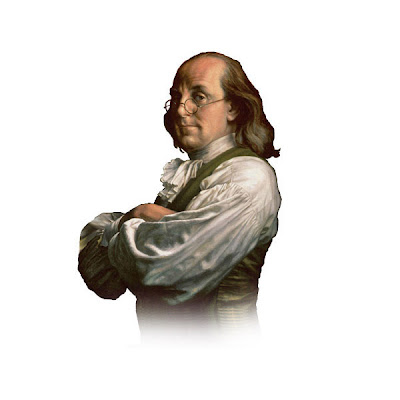 On this date, three hundred and three years ago a genius and revolutionary man was born...

Benjamin Franklin was born in Boston, Massachusetts to Josiah Franklin and Abiah Folger. He would go on to create or discover many things and become a celebrity of that age. Kind of if you mixed Steve Jobs with Bono(but not really). He helped found this nation and helped define what it is to be American.

Walt Disney knew the worth of men such as these in instilling the values that made this country what it is. Just like the "Great Moments with Mr. Lincoln" attraction at Disneyland or the American folklore of Johnny Appleseed, John Henry and others, Walt believed in educating as well as entertaining.

So in 1953, Disney adapted the children's book by Robert Lawson into the animated short "Ben and Me." I remember watching it on the "Wonderful World of Disney" as a kid and it helped spark my interest in history and my love of American history. For that I thank Walt...

Oh, and Happy Birthday Ben.
Posted by Honor Hunter at 4:23 AM

What's interesting to me about the "Ben and Me" short (one of my favorites) is that it portrays Franklin as kind of a bumbling screw-up constantly saved by his uneducated mouse friend. It levels the playing field even more than the early Americans claimed to, and furthermore it transforms the American dream (largely invented by Franklin, of course) into something communal rather than individualistic.

What is this a Founding Fathers blog?

Just kidding, actually Walt had a great interest in American history, so these sorts of topics are fair game.

Yet another disneyfication of dead white slave owners that raped and plundered the land while raping and killing the indigenous peoples. You guys live in such a fantasy world. Wake up people! It's a new day. Or at least it will be Tuesday.

You are right Tuesday will be a monumentous day...

But people like you, who are still mad at the past and use it as a crutch for why they have amounted to nothing, will still be losers.