Going Back To "Old School" Mars... 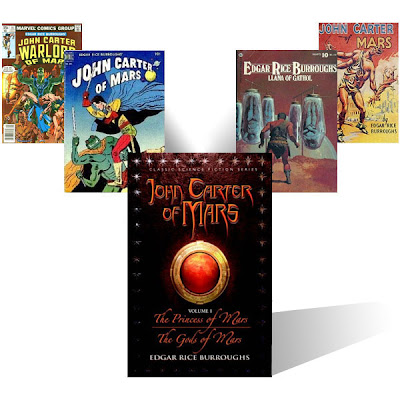 Or why I loooove Andrew Stanton...

Not in that way. Shaadup!

Andrew Stanton spoke during a writers panel held at the Santa Barbara Film Festival and as has been the case lately, John Carter came up.

It will be live-action, but it's not going to be a stylized version. Almost as if you dropped in a National Geographic documentary film crew on the red planet and discovered a long, lost civilization.

The project is huge and is a great challenge for him.

It will be a Walt Disney Picture(as we mentioned before) not a Pixar film, but being as Pixar is now Disney that shouldn't even need to be mentioned.

No plans for 3D, but Disney will probably pressure him(and they will, I'm sure).

The second draft of the script is done and casting will begin soon.

And my favorite bit of news is John Carter will be a Civil War soldier, which means if you know your Edgar Rice Burroughs, then you'll understand that Stanton is keeping it a faithful adaption. I've read a few adaptions of this and everyone tried to make it a "modern" John Carter set in present day events. They just didn't get it... and Andrew Stanton does. Which is why I loooove him.

Hat Tip to Ain't It Cool News.
Posted by Honor Hunter at 4:58 AM

Glad it will be live-action and not some animated Clone Wars/Pixar crap.

I'm looking forward to this one. But, I wonder why the're calling this John Carter of Mars. Wasn't the first one called A Princess of Mars. Are they afraid it won't sell with boys?

Looking at it from another point...

Maybe they don't want girls to confuse it with being another "Disney Princess" film?

Good point. I just remember when it was set up at Disney years ago. It had Tom Cruise as John Carter and Julia Roberts as the princess. Then, it was called A Princess of Mars.

And as Jeffrey Kazenberg told me when I asked him about it, the problem was the budget. John McTiernan was attached to direct and it labored in development hell. Such is the lore of Hollywood...

Hey Honor, have you heard how "Mars Needs Moms!" based on the book by Berkeley Breathed, is doing? I read where Robert Zemeckis is developing it at Disney under his ImageMovers Digital banner.

Last I heard they had a slick script and were moving forward.

Interesting to see who would win the battle of "Mars" projects at Disney, if they reached the finish line at the same time! Thanks, Justin