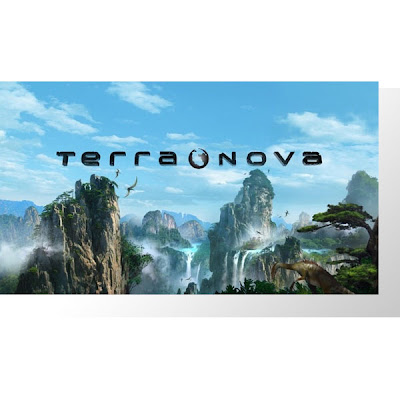 So, they've released some concept art from "Avatar" of Pandora...

Wait. I mean, concept art from prehistoric Earth from "Terra Nova," the new sci-fi series produced by Steven Spielberg for Fox. I know people will say it looks like that James Cameron film, but seriously, what do you expect dinoland to look like? If you've watched any of those History Channels specials or something on Discovery it looks about the same. It's pretty and I'm quite sure there won't be any ten foot tall blue cats walking around either.

An epic family adventure 85 million years in the making, is the new event drama slated for midseason from executive producers Steven Spielberg (“Jurassic Park,” “The Pacific”), Peter Chernin, Brannon Braga (24, “Star Trek: Enterprise”) and David Fury (24, “Lost”). The action-adventure series follows an ordinary family on an extraordinary journey back in time to prehistoric Earth as a part of a massive expedition to save the human race.

I hear that it's a family from a future where the Earth is dying and the only hope for humanity is to go back in time before the meteor came and whipped out all life as we know it. So this family apparently goes into the past to save their future. Not every human, just this family... cause family is important. I know, because I've watched "The Godfather," like a hundred times. This is supposed to be a mid-season replacement show, but it's a very expensive (so expensive Fox had to agree to full series, not just a pilot; sets too expensive to tear down and rebuilt if approved) and time consuming production so the Fox Suits don't know if it'll make the line-up. And they won't rush it because they want it to be an event series and a new staple to the Fox line-up. I'll be reporting on this one quite a bit since I happen to descend from a long line of dinosaur hunters.
I'm looking for ward to seeing the trailer for this one...
Posted by Honor Hunter at 3:37 PM

Spielberg is dead to ever since he "dropped the ball" on Indy 4.

Any Sleestaks involved in this one?

This sounds like the plot to Star Trek 4, going back in time to save the whales, which could very well be the dumbest movie plot in history. The meteor only wiped out the dinosaurs, there was no life back then, no humans, only dinosaurs, how could that save the human race? I'm not going to say if this looks like, Avatar was one of the worst films ever made, throwing it out there. It just turned people into tree hugging man babies, and took the story of 5 different movies meshed together. Take the movie Ferngully and digitize everyone blue, that's Avatar.

Kevin is obviously a right-winged closed-minded Republican. Anything they don't understand or feel threatened by they lash out against. Just because there are people who actually care about the environment of this planet does not make them tree-hugging man-babies. It takes more of a man to stand up and take responsibility for our stewardship of this planet than a bunch of wasteful Republican's who only care about money and oil. Look what they've done to the Gulf (both of them).