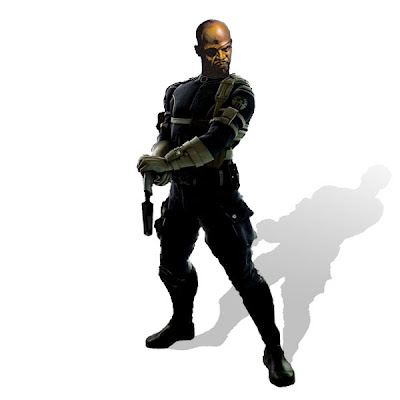 He's reported that Samuel L. Jackson has mentioned something about a S.H.I.E.L.D. movie after the "Avengers" film in 2012. Hmmm... I've heard that before, but where? Oh, that's right. Here, almost two months ago. Now, I didn't have Sammy quoted as saying it, but I had my Bothans verifying it. Which is why I reported it. I'm kinda offended Drew, I check out your site quite a bit. You clearly don't return the favor. Boo-hoo.

Seriously, I want to thank Drew for validating what my sources reported to me back in March. Now, if everything goes well we'll see that film sometime in 2013.

UPDATE: Boy, my massive ego is slowly deflating... now Russ from /Film is reporting the same thing. Now, that website I can't excuse since I sent Peter a link to the story back in March. Wow, now I know what those girls felt like when I lied and told them I was too busy and couldn't go out drinking... Sigh.
Posted by Honor Hunter at 4:38 PM

I thought this was a Disney blog???

All I see are Marvel stories! If I wanted that I'd go over to Super Hero Hype and get banned.

Marvel is now Disney you moron!

All the time, all over the place.

It won't be long before the merchandise floods the parks, then the characters, then the rides and before long you won't be able to find the mouse.

Maybe Honor should retitle his blog "Blue Sky Disney and Whatever Else I Feel Like Talking About Because This Is My Blog and I Can Write What I Want".

Seriously Honor, write about whatever you feel like regardless of what you title your blog.

Honor, seriously, you sound like a whiny 13-year-old kid who did the whole group project by himself every time you make a post about how this reputable source and that information destination recently printed a story that you posted here five-six months ago. If you don't feel like being sidelined by the big boys anymore, cut off connections with your Bothans and start posting news items after they've been printed by Variety. Otherwise, just deal with it. Yes, you got the story first. Yes, you're a really righteous dude for doing that. No, none of us care that /Film just posted the same thing you posted back last July. And you shouldn't either. You got it first, and we all know it. You don't need to make yet another smug/put out/whiny blog post about it.

"you're a really righteous dude"

Honor always gets the scoop because his "Bothans" are legit. Not his fault the others are slow to validate/report his scoops.

Hey Honor, I tried to post a link to your article over at /Film but it wouldn't accept it.

That's pretty low if you sent them a link in March and they're now reporting it from some other site. What a bunch of jerks.

Hey guys, don't be so hard on Honor. He is a big fan of the super hero genre.

As long as this has been mentioned lately, here is my take on the whole Disney/Marvel thing...[If anyone even cares what I think, I have to keep reminding myself that this is the Internet; a cold, heartless place.]

I personally am perfectly fine with Marvel being acquired by Disney. Yes, when the news first broke it was a bit of a shocker, but I don't really mind it. In the long run, this could turn out to be a very positive thing for all parties involved. It has already been said that the Marvel characters will NOT change, so people really should not worry or be upset about this. In the grand scheme of life, there are more important things to worry and be upset about, ...like a disastrous oil spill in the Gulf for instance...but I digress.

This is sort of similar to the Pixar acquisition. Pixar may be a part of Disney, but their cooperate culture has not changed, and even better, it had bled over to Disney Animation Studios.

So I wish Disney well with Marvel, and here's hoping for a bright future for Disney! :)

Off topic, but what the heck is Reboot Ralph to be released by WDAS on March 22nd 2013?

"This is sort of similar to the Pixar acquisition. Pixar may be a part of Disney, but their cooperate culture has not changed, and even better, it had bled over to Disney Animation Studios."

Urban myth, kids. Pixar has changed. WDAS, not so much.

Ask the folks who've actually worked there for the past decade. If you can find them.

"Urban myth, kids. Pixar has changed. WDAS, not so much.

Ask the folks who've actually worked there for the past decade. If you can find them."

Are you one of them? If not, then how do you know any of this?
Let me guess, you are also the same guy who doesn't like the Muppets? (if not, then I'm apologize, but its worth asking)

Also, stop with the condescending tone. Anyone who has that kind of attitude, (especially on the Internet) I cannot take seriously.

There is NOTHING wrong with trying to be caustically optimistic.

And if you are just going to scoff at me, SAVE IT. I will not be coming back to this comment page again. You will only be talking to yourself.

And by the way;

Anyone still propagating the fanboi wet dream of Lasseter and Catmull changing Burbank's culture to match Emeryville's obviously hasn't worked in either studio for very long, if at all. Those who do will continue to expose themselves as outsiders whether or not they choose to accept it.

It's also foolhardy to believe that TWDC is completely hands off regarding Pixar. One quick look at the upcoming release schedule proves the point well.

Who's more likely to push for sequels of successful Pixar franchises, Iger or Lasseter?

Who wants to grow merchandise sales from these franchises by adding new characters to promote and exploit?

Harboring the fanboi belief that Pixar is fully independent and gets to call their own shots is just plain moronic.