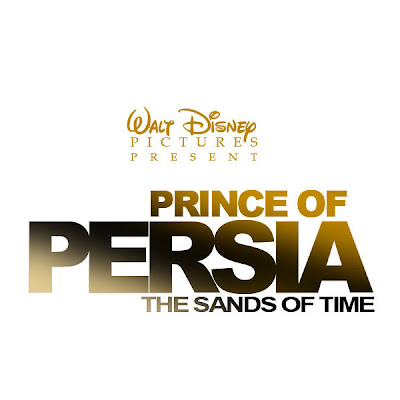 Well, the reviews for Walt Disney Pictures' "Prince of Persia: The Sands of Time" are starting to come out...

"As of this writing, no one has actually made a great video game movie. But now someone has at least made a good one.

It is good old fashioned Jerry Bruckheimer cotton candy entertainment; sure it’s tasty, but it evaporates on your tongue the moment you touch it." - Massawyrm, Ain't It Cool News

"Why is it that at the end of the film, I walked away feeling like I just saw a big trailer with no movie attached?

"Prince Of Persia" works as mindless, forgettable, sit-in-the-air-conditioning entertainment, but it's not built to last, and it offers nothing lasting to an audience." - Drew McWeeny, Motion Captured

"Prince of Persia is a rip-roaring great time at the movies, a summertime treat that "reverses time" to when flicks were just plain fun. Mixing old-fashioned content and state of the art effects, this Jerry Bruckheimer production trades ‘pirates' for ‘princes' to revive the swashbuckling, sword fighting spirit of the sort Douglas Fairbanks or Errol Flynn specialized." - Pete Hammond, Box Office Magazine

"To the credit of director Mike Newell (drawing on his Harry Potter and the Goblet of Fire wrangling skills), a conclave of screenwriters who keep the dialogue on the sharp side, and the life's-a-game instincts of producer Jerry Bruckheimer, all that Arabian Nights-like stuff unfolds at a brisk, well-paced clip." - Lisa Schwarzbaum, Entertainment Weekly

"Its restraint might put off thrill-seekers, but if you can endure the wooden dialogue and sloppy exposition, it musters the entertainment quotient of a middle-order Harry Potter." - Ian Nathan, Empire Online

"With apologies to Ben Franklin, the only things certain in life are death, taxes and that a Jerry Bruckheimer film will do its bombastic best to pummel, pound and, now, parkour you into submission. "Prince of Persia: The Sands of Time" is all that — deaths by the thousands and the sort of spectacular spectacle possible with a rumored budget of $150 million and change.

But it should be more." - Betsy Sharkey, Los Angeles Times

"Aimed squarely at youngsters and families, "Prince of Persia: The Sands of Time," which had its world premiere in London on Sunday, is a handsome, fast-paced and innocuous adventure that's easy to take but lacks epic scale." - Ray Bennett, The Hollywood Reporter

"For twenty years, audiences have been noticing the similarity between big action and fantasy movies and video games, but “Prince of Persia” goes beyond similarity; it actually feels like a video game." - David Denby, The New Yorker

"Another video game to movie disaster? Doubtful. Bruckheimer knows what the audience is looking for and Prince of Persia, if it makes tons of dough, is going to be the eventual replacement for the Pirates franchise.

Prince of Persia is a lighthearted but troubled movie. Troubled in that the plot makes no damn sense and the movie is too long." - George 'El Guapo' Roush

"Prince of Persia: The Sands of Time, is still no more or less than an all-out Jerry Bruckheimer adventure. His fondness for regular beats of action, idiosyncratic comic relief and a love-hate relationship between the lead couple are all present and accounted for, and at times you'd be forgiven for thinking you'd wandered into Pirates 4.

And that's no bad thing, because what Bruckheimer does best is deliver entertaining summer adventure for the multiplex masses, even if it does follow a tried and true formula. If it ain't broke, as they say, don't fix it" - Joe Utichi, Cinematical

Bit of a mixed bag, with some dealing light praise while others damning it with faint criticism.

Well see after Sunday if the Mouse has a successor to Pirates franchise...
Posted by Honor Hunter at 8:10 PM

I found the movie to be fun all the way through. And the movie had the packed house I was watching it in quiet all the way through and total applause at the end. Every person in my group of 7 not only said they loved it, but expressed a desire to go back and see it again. I never take what any critic says because usually they are to pompous in their approach to any film. Truly this was a fun adventure that didn't require the viewer to have to over think some sort of message that Hollywood was pushing in a movie.

Most of these reviews could apply to most Bruckheimer movies.
Thin on story and plot, lots of action and explosions. And most of the time they make NO sense.

keep in mind the original potc, made alot of money but nothing compared to the second/third I hope Ross keeps that in mind that POTc had a 46 million opening weekend. and prince of persia shouldnt be considered a failure if it has a similar opening

Just returned from the theater and am counting the hours 'til I can go again. This one is smart, beautiful, perfectly set and moving. In fact, I was surprised to be moved by it's virtue, as in 'the freedom and habit of choosing the good.' And it's not just the main character. Virtue abounds - I hope the boxoffice follows suit.

you like the 2nd and 3rd potc movies over the first one? i have NEVER heard someone say that. the first was by far the best in my opinion.

He didn't say he liked it better. He said it made more money, which is true. Read before you criticize, puhleez. :P

I sneaked into a theater to watch this movie (I refuse to pay for crap like this), and left halfway through. Lacks style, clarity, characterization, suspense, or thrill. It was HORRIBLE.

I really liked it, thought it was better than the trailers made it out to be :) But it wasn't as good as Pirates. Will probably see it a second time soon!

you actually criticizing a movie that you did not pay for? Sad that people still do that sort of thing its just another way of stealing

Preliminary numbers are in, and it looks like a pretty big bomb. $30 million for the 3-day is just terrible. It'll have to work hard just to make $100 million. Two years ago Prince Caspian opened to $55 and was considered enough of a dud that Disney let the franchise go to Fox. Persia basically opened to half of that. Unfortunately, I don't expect much more from "Sorcerer's Apprentice".

Bad editing ruined this film. The editing was too choppy and reworked some of the story, leaving interesting bits and angles out as well as forcing too much of that "rigid" tv slow motion into areas where there needn't be any since there quite enough cool looking slow motion bits that were filmed to be so in relation to when time would stop and reverse.

The older screenplay was a lot more fun and had more of that POTC backstabbing, plot-twisting aspect that made it a delight. I don't know why all these decisions for change were made.

Although the numbers aren't terrible, it's still pretty disappointing for what was supposed to be a major tentpole. A lot of bad luck for Disney in the box office department lately. :(

"A lot of bad luck for Disney in the box office department lately."

Yeah, that Alice in Wonderland movie just bombed as well.

ha! I thought the same thing. With "Alice" and "Toy Story 3" this could be a VERY good year for Disney at the box office. Hopefully "Tron" will deliver as well. But I have modest expectations for "Sorcerer's Apprentice" and "Tangled"