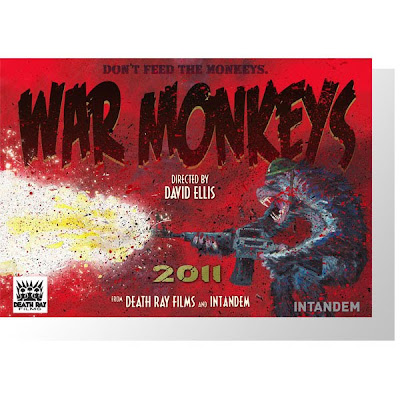 You know there are many things that have little or nothing to do with the Mouse that I really enjoy...

If you've followed the blog, then you know that I have several interest that are tangentially related to the Mouse or are just musings about the entertainment industry in general. I love genre movies for example. If you've read much of my commentary/ranting then you'd know I love science fiction, pulp, detective-noir and pretty much any good action film. With that in mind, I love to seeing blending of these type of films, like horror-comedy or sci-fi-horror and so on. So I follow the entertainment biz pretty close and I've seen some projects that have sparked my interest.

Here is one that's been on my radar that I've found out about from overseas Bothans in Cannes...

It's called "War Monkeys." Now that's a catchy name, huh? When I was a kid, I loved anything to do with "Planet of the Apes." I had cards, mask and remember watching the movies and even the television series. So all things simian are kinda interesting to me. Now this looks like something fun, monkeys with machine guns. Not talking monkeys, but really mean, real life ones that apparently have learned to do naughty things.

It's the story of two losers trapped in an underground military lab where a horde of combat-trained, genetically altered monkeys are set free. The writer of it describes it as a remake of "Gremlins" if Quentin Tarantino had directed it. David Ellis is directing it from a script by Cleve Nettles, from a story by Chris Patton. Nettles and Patton will produce through Death Ray Films and Intandem Films for a 2011 release. Apparently they're casting as we speak/write.

Death Ray Films are the ones that are doing that "I, Frankenstein" project that sounds like it's a really twisted take on the classic monster mythos combined with film noir. Monkey's sound like it also could be this crazy kind of fun.

Wait. Is this a Disney film? Looks a little 2 violent to me.

Some people just don't know how to read.

Artwork is ok, concept is great. Not a fan of the director. Snakes on a Plane was the ASS.

Will wait and see.

Why is this on a Disney site???

Why isn't Honor reporting on Rise of the Apes

If you like genre movies, Honor, there is one that you probably like, released in 2002 and called: Eight Legged Freaks, full of giant spiders!

If you haven't seen it yet, you should find it, it's great and very fun!

You should go audition for a role, Honor.

Honor does look like a chimp... I mean, chump.