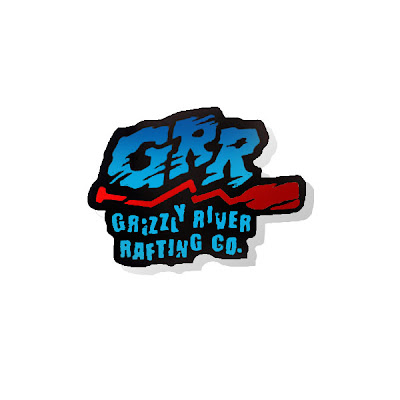 Even with the Extreme Makeover going on in DCA, there are small, incremental steps that are slowly making this Second Gate a better place to spend time in/at...

If you've read the Blue Sky Buzz updates before then you know that a lot of what was supposed to be expanded has fallen by the way side. One of the things that has been planned but never implemented is a "plusing" of the Golden State area/land. The Grizzly River Run attraction to be exact. In its original incarnation of an extreme sports rafting company that had taken over an old, fallen into disrepair national park, there were supposed to be animatronic bears, condors and other animals. But these critters fell victim to Disney Bean Counters, the most vile and soulless of Suits, in my, most humble opinion. And so when it premiered in 2001, it was a very nicely themed water ride in the prettiest area of the new park... but it was missing the truly layered details of people seeing mother nature's creatures as well as her water. It was missing the Disney difference.

When the Extreme Makeover was proposed for DCA, this was one of the proposals put back in. Except this time there was an added bonus, with each area themed to a different period of Californian history, the extreme sports motif would be discarded and the audio-animatronic creatures would be back, all set to the theme of a mid-50's Yosemite style national park. As always, budgets get cut as pieces of the puzzle begin to be realized and cost rise more than expected. So again, the animatronics got cut. And the mid 2oth century theming was pushed off to a later date as well.

But have you ridden GRR lately? If you haven't then perhaps you should. Because if you were to take a look around the areas, near the drops and around the queue areas, you'd notice some subtle differences. The modern kayak that you used to see as you made your way down the queue toward where you get on disappeared a few months ago. In its place was a nice wood crafted boat that... might belong to a bye gone era in, say, the Fifties? And if you've noticed certain areas around the Grizzly area have started to have the extreme sport elements disappear. Replaced with something you would find in an earlier age back in the mid part of the last century. 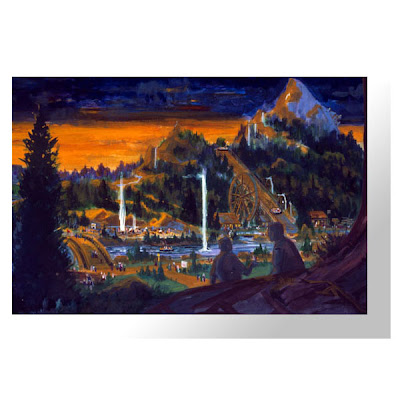 And if you had showed up in the last couple of weeks, you'd have noticed that as you go down the first drop that the metal boat that was there... isn't. A more traditional one is. And an old fashioned cap is there with an artist easel. Somebody has been painting nature it seems. The same would be seen in the second drop. There's an old boat thrown over the side and the River Guides wooden hut has been redecorated with things as well. Little things.

But they're not the end. Expect more and more of the extreme sports theme to disappear over the next few months. More and more of the queue line, the wooded areas around the attraction and the costumes will be gradually changing. The costumes? Yeah, there will be new ones to reflect the different time period. If you want to see what they look like then you should Google something like, oh, 1950's national park ranger or something along that lines. It's not going to happen right away, but it is planned. Slowly this attraction will be molded into something closer to what was originally proposed for the Makeover.

But what about the animatronic animals? Well, we will have to see if the Imagineers can justify all that R&D they're doing for the Grizzly Trail expansion land for Hong Kong Disneyland. See, they're working on animatronic bears for that land and they look remarkably like the ones that were proposed to go into GRR. Remarkably. What would it take to reproduce a few more? Maybe throw in a skunk or some other animal? Hmmm... Let's hope WDI has some smooth talkers and John is there when they ask for it.

Going for a rafting ride at DCA in 2011 could be surprisingly different...
Posted by Honor Hunter at 12:01 AM

Lol that's the key, just roll out Lasseter everytime they want something.

This is nice to hear, that they're doing things like this quietly and steadily. I assume the ride hasn't been closed - don't know much Disneyland so.

Hope it gets finished then!

They should bring in Ranger Woodlore and Humphrey the Bear (at least have them at a nearby photo-spot) Maybe Huey Dewey and Louie in their scout gear...!

GRR is one of the most beautiful places of DCA, so when it gets better, that's a good thing :)

Thanks, Honor. Any hope that the giant bear statue at the entrance is going away?

For me this is some of the best Disney news I've heard in quite a while! GRR is one of those rides that draws mixed feelings. In some ways it is so beautifully done, but in other ways I think it could be so much more.

Even if the animatronic animals are a long way off, this transition to National Park over extreme sports theme is what I've wanted since I first saw GRR. You have these beautiful historical looking elements of the ride--why not fully exploit them?

That's funny that you mentioned this because I rode GRR last weekend and I thought the queue was different. But I normally bypass the queue and do Fast Pass so I wasn't sure.
Thanks for the confirmation!

it's the small details that often make the difference.

Never been, but always assumed it was a national park theme. GRR never seemed to say extreme sports to me. So this is a suprise in a different way..

Well I guess by the time I see this park I won't have any of those 'old' memories of DCA, just the new ones being created - or modified, right now.

Very cool news. I'm glad that in the mist of this DCA expansion, the Golden State area is seeing some changes too, even if they are small and gradual. Every little bit helps.

I haven't been on the ride in a long time, but it looks like I'm gonna have to go on it soon just so I can see these improvements.

Its true, the extreme sports theme was a major misfire.

Excellent idea! Two of my favorite characters from the classic shorts. I would love to see them in the park!

I remember they also had plans for a miniature railroad that would have weaved its way around (and through) the mountain, which they were going to have called the Carolwood Pacific after Walt's garden railway. It would be a wonderful addition to the area I think, along with a good dose of nature animatronics. Remember those rumors about Imagineers putting cardboard cutouts along the riverbanks to test sightlines and if they would be viewable for long enough to justify their addition? I really hope the second phase expansion happens!