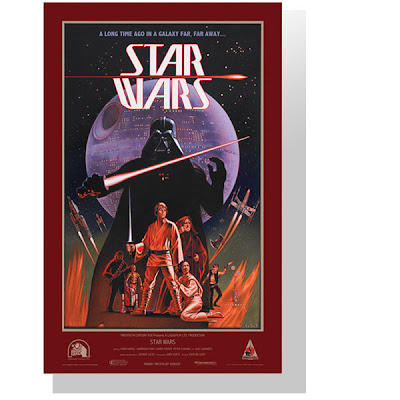 The Big Daddy of them all celebrates turning thirty-three today...

George Lucas, the wunderkind behind that endearing little film, "American Graffiti" came out with his third film on this day. He wanted to make a film for kids like the innocent serials the young boy remembered as a child in those small town theaters he would go to on weekends. Believing Star Wars wouldn't make much money, Lucas decided to hedge his bets and merchandise it. Bringing in a little scratch to make up for what he thought wouldn't be that successful of a film, the film maker changed cinema as we know it.

And the rest is history.

Episode IV as it would later be called, truly was the first film to blow my mind from that opening image of an immense Star Destroyer moving above us, to the last image of the heroes standing, waiting to get a medal from a princess. After that, Star Wars was born and kids everywhere would be saying that now familiar phrase, "May the Force be with you."

Happy Birthday, "A New Hope" and let's pray that phrase rings true over the coming years...
Posted by Honor Hunter at 12:01 AM

The Empire Strikes Back is a much better film narratively, technically and structurally than Star Wars. It took A New Hope and improved upon it in almost every way. Sure Star Wars gets its props from being the first by establishment and forever changing the way movies were made but Empire was more mature both dramatically and artistically under the careful direction of Irvin Kirshner and producer Gary Kurtz. The characters and their relationships are more fully developed and the dialogue perfectly polished with a bullet-proof script by Leigh Brackett and Lawrence Kasdan. The visual effects which were developed for the first film were pushed to the boundaries of what was technically possible in the second. The Battle of Hoth visually remains to this day the undisputed best cinematic battle in film history thanks to the talents of Jon Berg, Phil Tippet and Dennis Muren. The Empire Strikes Back is a triumph of film making on every fundamental level and remains not only the greatest sequel ever made but one of the greatest motion pictures ever made which is why I'll be celebrating Empire's 30th rather than A New Hope's whatever 33rd.

This week on Blue Skywalker...

Aunt Beru spills some blue milk and Honor Honor gets the exclusive from his Bothan spies who died to bring us this information.

I was just finishing my junior year in college when I went on opening day to see this film. All I could think of was, "They bore into my head and made my imagination real!" Thanks for the journey to a galaxy far, far away.