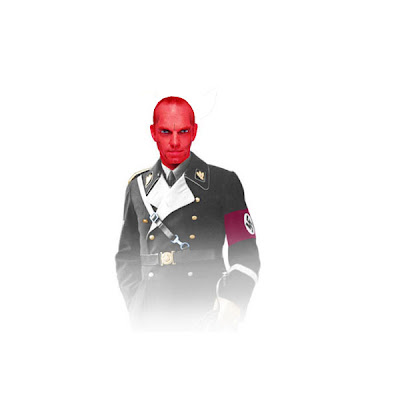 We all heard that he was offered the role, but up until now it was an unconfirmed rumor...

Marvel Studios announced today that Hugo Weaving has been cast to star as Johann Schmidt aka the Red Skull in the studio’s highly anticipated movie CAPTAIN AMERICA: THE FIRST AVENGER opposite Chris Evans and Hayley Atwell. In the early comics, Johann Schmidt was drafted into loyal service of The Third Reich and renamed “The Red Skull”. The character will be updated for the feature adaptation. Joe Johnston will direct the film penned by Christopher Markus & Stephen McFeely.

Marvel Studios’ Kevin Feige will produce CAPTAIN AMERICA: THE FIRST AVENGER. Alan Fine, Stan Lee, David Maisel and Louis D’Esposito will executive produce. The film will be released in the US on July 22, 2011 and distributed by Paramount Pictures.

CAPTAIN AMERICA: THE FIRST AVENGER will focus on the early days of the Marvel Universe when Steve Rogers volunteers to participate in an experimental program that turns him into the Super Soldier known as Captain America.

Weaving was last seen in THE WOLFMAN and his voice is very recognizable as Megatron from TRANSFORMERS and TRANSFORMERS: REVENGE OF THE FALLEN as well as Noah the Elder from HAPPY FEET. His other film credits include starring in V FOR VENDETTA, THE MATRIX franchise, and THE LORD OF THE RINGS trilogy.

In addition to CAPTAIN AMERICA: THE FIRST AVENGER, Marvel Studios will release a slate of films based on the Marvel characters including the highly anticipated sequel, IRON MAN 2, starring Robert Downey Jr. and Gwyneth Paltrow on May 7, 2010, THOR on May 6, 2011, and Marvel Studios’ THE AVENGERS on May 4, 2012.

Now, we have to wait and see what he looks like as Johann Schmidt...
Posted by Honor Hunter at 3:44 PM

I loved Hugo Weaving in Priscilla Queen of the Desert. But no one ever mentions that film, for some reason. ;^)

That's one of the scariest looking pieces of graphic art I've seen on this site.

Honor, if you know anything, you gotta comment on this!