A Fifth Trove Of Treasure...

There's a lot of booty where that came from... 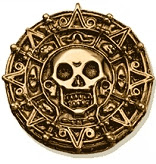 You knew that it was coming...

When something is as successful as the Pirates franchise, a film studio isn't going to let it die.  And as long as they can make interesting stories into films I don't really mind.  That means that "Pirates of the Caribbean: On Stranger Tides" offers a bit of an obstacle.  If we judge by the good story standard then that film should put a bullet in the tale of these pirates for eternity.  It was bad.  It was boring, it was bland, and felt like a relative that had stayed too long after the clock struck twelve on New Year's Eve.

I didn't think it was a great continuation of the Jack Sparrow character, and it was a waste of a villain as deliciously evil as should have been Blackbeard played by Ian McShane.  And Rob Marshall should not have been the director, nor should he be the one behind the camera in any future Pirate films.  He was simply the wrong man for the job, unless Walt Disney Pictures planned on making the film a musical, which they weren't.

So today we find out that the Mouse has hired a new screenwriter to take over from Terry Rossio and craft a new story with a fresh take.  For those of you that haven't heard, Variety is reporting that Jeff Nathanson has been hired to be that writer.  I don't know what to think yet about this because Nathanson has done some great work (Catch Me If You Can), but he's also did a lot of mediocre work (Rush Hour 2), and even some bad work (Speed 2, Kingdom of the Crystal Skull).

Now, time will tell if the drafts that made it up on the silver screen were actually his, or the result of a Frankenstein-like script process where many authors put in a clueless collection of their own words.  Sometimes the person to blame for something bad belongs to one man/woman, and sometimes the blame should be spread around.  When we see the results of his work on this we can then make a better judgement.

I'm hearing that Suits in Burbank want to do a Mission Impossible thing and bring in someone that can take over the franchise when Depp no longer wants to, or is just too old to be plundering.  The same way Jeremy Renner came into "Ghost Protocal" to be there for Tom Cruise to hand off the series once he's done.  Maybe that's why Nathanson was hired: to prepare for that day.  We'll know more as the year moves forward, but right now all we have is the name.

We'll have to wait till we see more of the map toward this new treasure...
Posted by Honor Hunter at 2:09 PM

Pirates 4 is in the billion dollar club with only a hand full of other films. How can you say it was lacking whatever you said? My family went to see it twice at the theater and it is very rare we do so. It amazes me how it seems like all the die hard disney fans hate these pirate movies while the public eat them up. They are box office gold and I don't expect any less from Pirates 5 - which I hope we sail for the lost city of Atlantis to discover the mermaids origins.

First, I don't consider myself a die hard Disney fan...

I am a true fan of Disney, but I'm no shill for the company. I speak the truth as I see it. I am no yes-man, I am no no man.

But if you read what I wrote properly, you would know I was talking about this sequel, not about the entire franchise. I happen to be a fan of the franchise, although I think the first one is the best one.

The last one is the worst. It doesn't share the same fun, enjoyable script, or the depth of the other three, no matter how convoluted subplots were.

Just because a film made a billion dollars doesn't make it a good film. Look at Independence Day. It's a piece of s@*t in terms of a film, but people liked it.

I'm always amazed at the people that read a post here and make presumptions about what Honor thinks. They never think to read it carefully or maybe read more posts he's done on the subject. I lost count of the number of people that complained about him being a Marvel fanboy simply because he talked about how he was disappointed with The Dark Knight Rises.

Anyone who's read this blog for a while would know how wrong they are.

Just because you didn't like On Stranger Tides doesn't mean he doesn't like the series. But someone reads a critical statement of that film and automatically assumes that he was besmirching the entire franchise.

Read the dang blog before you shoot your mouth off, people.

Pirates without Depp/Sparrow? With Bloom, Knightley, and Verbinski already gone, what are they smoking in Burbank?

Last year the news came out that the new film would be filmed (in part) in Puerto Rico. I just been sent an article indicating that the Black Pearl has been in the island for weeks anchored on the west side. Film crew is expected this month. So I would think that this new writer is just for a small rewrite...

Apart from the first Pirates, I am very disappointed with this entire franchise.

I thought the first one was the best. The second one had its moments. The third one was a big bore. I didn't bother with the fourth one. Now that you said the fourth was a bore, why didn't you say the same for the third?

Pirates 4 opened some new plot lines to be explored in the next film, including the fate of the missionary and the mermaid, the secret of Blackbeard's magic sword, the imprisonment of the Black Pearl and its crew in a bottle, and the escape of Penelope Cruz from her island confinement. While I enjoyed this latest offering least of the four Pirate films, I still found much to enjoy, and I will certainly see Pirates 5.

Without Johnny Depp, I have no interest in seeing another Pirates of the Caribbean film...without any of the original characters, there isn't anything significant to tie to the originals.

The first Pirates film is the best, hands-down. Some people like to criticize 2 and 3, but I think that's because they couldn't handle the tone shift. The first glorified piracy and made it funny whereas the next two became far darker (I will admit that I disliked the location change for the 3rd, though). The 4th was a fun film, but it felt like perhaps they were trying too hard to just give the audience what they wanted with the romance between Jack and Angelica. I'd say the best thing about the film (after Jack's antics) were the mermaids, which was possibly a choice of "give them what they want" that worked.

"On stranger Tides" was my favourite - whereas I literally had to stop watching the (previous?) one where they're frozen on that ship because I found it so boring.