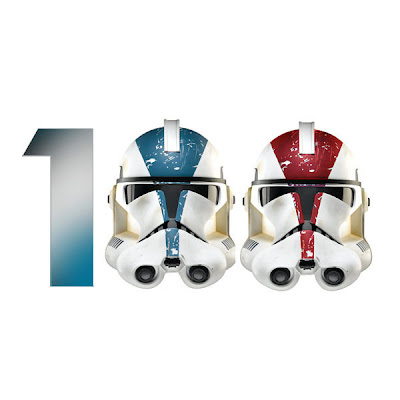 The Clone Wars celebrated a significant milestone on Friday...

100 episodes.  That's quite an achievement.  Now, not all of the episodes are great, a few are, but many are of a higher quality than the Prequels.  Certainly better than the first two, at least.

And this is the last, and fifth season of the contract for the show to be on the Cartoon Network.  If there is to be a sixth, then it'll likely be on Disney XD now that the Mouse owns it.  The problem lies in the rerun rights to the show, which will belong to the Cartoon Network for the near future unless Disney buys them out.

It's unknown how long the show will go, but it is still very popular.  The Clone Wars were only supposed to have lasted about three years in the films, so with a six season happening you'd have to wonder what time these events take place?  Two seasons every year?  And if they go beyond that, how would that work out?  Time in the Star Wars galaxy must be different than it is here I guess.

If you'd like to see a cool montage of the episodes over the last five years then check out Entertainment Weekly's article on the show.  And prepare for more episodes, and more series for the Star Wars universe.  Besides "Star Wars: Detours," I hear they're working on other ideas for animated shows.  I still like the idea of one that takes place in the original trilogy with Luke, Han and a bad guy named Darth.

Now if they could get ABC to work out something for that live-action series...
Posted by Honor Hunter at 1:51 PM

That horrible cartoon and the worse won before it ( the hand drawn one) remind me of "Danger Island" from the Banana Splits show. Stuff goes on and on and on--the characters never stop talking--and yet nothing ever really happens. Zero character development--and badly designed--ugly as sin.