The honor roll for last year... 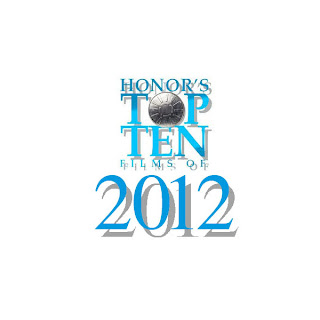 There were a lot of films that I saw that didn't make the top ten.  Many were good, but didn't make it in to my list.  It doesn't mean they weren't good, or I didn't like them, but it's simply a matter of taste.  These are the films that reflect what I liked best.  I'm sure your list would be different because everyone has their own likes and dislikes.  Life is filled with variety and flavor, and it's great we all have the choices we do, and the freedom to actually choose our own desires.

So, without further ado...


10  Looper - Finally, a futuristic film that didn't try and rip off "Blade Runner" in its approach to the story.  Looper is a great twist on time travel, and originality with Joseph Gordon Levitt and Bruce Willis channeling the same character; one from the future and one from the far future.  A clever script, a interesting tale, and a compelling ending that wasn't all wrapped up in a bow.

9 - The Grey - A harsh tale, centering on Liam Neeson and a band of survivors of a plane crash as they trudge through the wilderness looking for civilization.  I've never been so happy to have electricity.  It shows how primitive things can get when all that we have fails us.  All we have left is what makes us human to survive with.

8  Argo - Watching the first ten minutes of this film make it seem like it was set in current times, with current conflicts.  But this film is shot like the wonderful 70's films like "All the Presidents Men" and "The Parallax View," even though it's a clean cut story of getting a group of Americans out of a very bad situation.  It shows you the messy bureaucracy that people have to go through, to get common sense done in a chaotic situation.  Ben Affleck shows his directing chops at their best with his third film behind the camera.  A gripping film that has you invest in all the characters and root for their escape from a bit of history that many have forgotten.

7  The Hobbit: An Unexpected Journey - The first third of a massive nine hour film, really.  And since you know I love "The Lord of the Rings," I'm sure you'd think I like this.  And you would be right.  Even though the film has added scenes not in the book, the story feels great and expansive.  It takes almost an hour to get out of The Shire, but for those like me who love Middle-Earth, it's a wonderful chance to enjoy the world that Tolkien created.  While some were left frustrated with the open ended conclusion, I simple was frustrated at having to wait an entire year to see Smaug.

6 - Zero Dark Thirty - A intriguing portrait of what it takes to find a monster.  The details of what it took to find Osama Bin Laden in what would be the biggest manhunt in human history is at once, both frustrating and fascinating.  It takes you to a very different place and shows you how, and why the murky shades of grey fall to one side or the other.  The last act as they descend on the compound in Pakistan is incredibly gripping with tension, even though we know the outcome.

5   Django Unchained - It was as if Sergio Leone had made a comedy.  A bloody, bloody comedy.  Quentin Tarantino's revisionist/escapist take on the War of Northern Aggression is a funny, brutal twist on the spaghetti westerns of the 60's/70's that were so iconic in American film history.  The characters were all interesting, even when they were bad, really bad.  The tale of a slave taking revenge for the act that led to his people being put in chains was an interesting twist on the Western, or the Southern, as Tarantino would call his.

4   Jack Reacher - Tom Cruise plays a character that looks nothing like him with a great amount of skill and believability.  I was skeptical when I heard that he had signed on to play the character of Jack Reacher, but will admit that there was no need to be.  It's a fine detective story of a man who was built to take and handle a whole lot of pain.  Reacher is a man that finds himself in some serious trouble, but it's usually trouble that he is looking for.  This film was like watching an old, late 60's/early 70's film with the very organic way it was handled.  A great through back to the kind of films that Steve McQueen used to do.  The car chase in it is very reminiscent of the one in "Bullitt" and Cruise gets kudos for doing most of the stunt work himself.

3   Skyfall - A great Bond film.  Not as good as "Casino Royale" was, but darn good.  Daniel Craig shows why he's the best James Bond since the original here in this tale that actually delves into the past of 007, and shows us a bit of why he is who he is.  With a very muted ending that comes out as if it is something from the Seventies (like Jack Reacher), like "Get Carter" or "Point Blank" type films.   More license to kill, the better when in the capable hands of Sam Mendes and Craig.

2   Marvel's The Avengers - Nothing like going to the theater for a Saturday matinee, even if it's not on a Saturday.  This big budget superhero film is a refreshing break from the bleak, dark and serious stories told by Hollywood today.  It didn't try and explain away the tights, it embraced them and had a grand time doing so.  I look forward to more of these adventures.

1   Prometheus - A controversial film that many either loves or hated.  I was in the "loved" camp.  I found the correlation between our own history and the creation of our existence a fascinating story.  Finding out we didn't evolve from monkeys has never been so interesting to me.  Ridley Scott's return to a film that made his career is a grand tale, told by a master of film in a way that few films do today.  If you haven't seen it, please do.  If you have seen it, take a look at it again.  There is so much here to ponder.

Honorable Mention (In No Particular Order):

The Cabin In The Woods

Snow White and the Huntsman

Cloud Atlas
Posted by Honor Hunter at 9:52 AM

Prometheus sucked. You lost ALL credibility with that one. #1 seriously?!?!? GTFO.

I agree with everything except Prometheus. That aside, great list of film from 2012, including your honourable mentions.

No love for "The Dark Knight Rises"?

I'm so glad you picked Prometheus. I always feel like I'm alone in loving it. I think Ridley took a chance and put a lot of work into the film. Also, I can't see how anyone would think the movie sucked after Michael Fassbender's performance. Give that man an Oscar!

You don't think that Honor liked Prometheus, then you probably haven't read his post on the film earlier in the year. It's clear that he really enjoyed it, there are two or three post on it and the subtext alone.

Same goes for John Carter, he's been clearly evident about his enjoyment of that film.

And I agree with him on both. Most people who didn't like John Carter, didn't see John Carter heard all the bad publicity about it.

Either way, in the end it all comes down to opinion. You have yours, he has his, and I have mine.

Hmm. Prometheus was not about how man did not evolve from monkeys... its sci-fi premise is that all life on Earth was seeded by an alien force, from which all plants, animals and bacteria on Earth evolved from. Just thought you should know that since you picked it as your favorite movei of the year.

Umm.. Prometheus presented, poorly, the idea that all life on earth - including the monkeys that we evolved from - came from one alien who gave his life to create it. That's what I saw. To say otherwise, to me, is to misunderstand or misrepresent what was presented. It was just kinda stupid, really. Bad science fiction...

Again, it doesn't in anyway say that we didn't come from monkeys, but that all life evolved up through this being that broke itself down cellularly, monkeys included.

Chady, I would disagree you on that.

The film does not propose that all life was created by the aliens in Prometheus, but that mankind was. Which is why we look so much like them.

the other animals were not looking to the stars to see where they came from, we were.

It's not to say that they couldn't have you called from monkeys according to the story, but the emphasis was on humanity.

But, it was left as an open-ended question for discussion, Which is why we're still talking about it here.