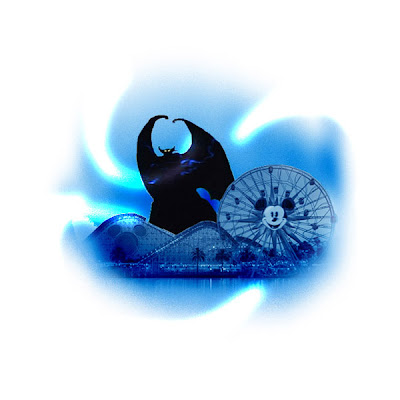 I got a lot of e-mails about that story of Tokyo DisneySEA possibly(very likely) getting DCA's "World of Color" show...

Mostly asking what exactly it was. Now, if you want to see exactly what it is you'll have to wait till next spring, but I can give you some insight. And yes, it's going to be a great show that'll quickly become the alternative to Fantasmic! for the Disney faithful. Not to mention the families that will swarm to this new viewing area to watch the closing show to the park...

Well, if you've ever seen Walt Disney's Wonderful World of Color then you've seen how it's going to open. Lots of color, rolling kaleidoscope style stuff and then Tinker Bell makes her appearance. The show will be themed to emotions. You know, like love, anger, happiness, sadness and all. There will be amazing choreography with the water spouts. If you've seen Bellagio then you have an idea, but it'll be even more dazzling than that. This show uses a great deal of computer power and will be the most complex show that Disney Entertainment has ever put on. Each section of emotion will be separated from the other and you'll be able to tell what's going on my the music and images on the screen. An example is watching Simba see his father die... and you will see it on the screen and then the show will go black and you'll hear the characters talking. Then BAAM! The sky lights up... It's very emotional, very dramatic and filled with heart. I'm going to love it when people see Chernabog rising out of the water spewing fire all over the place. I do love those villains after all... And for the young ones you have Zurg and a host of other characters.

This will be the last thing that happens in the park as I mentioned earlier. Due to all the technical aspects of the show, Screamin', Mickey's Fun Wheel, Silly Symphonies Swings and Golden Zephyr will all be shut down for the show. So WOC will be the finale to the park as of next March/April. After it's over and the park announces that it is closed guest will make a run for the exits, unless they stop by that other wonder: the bath rooms. The largest in any Disney theme park(hehe). But as people leave the turnstiles they'll be talking about the beautiful show they just saw. And how Disney's California Adventure is actually becoming a "Disney" adventure for a change.

when we giong to have new park at disneyland resort? is disney sea still giong have disney world of colour?

This sounds like a fantastic show. I'll definitely try to get out to Cali next year to see it.

Chernabog and Zurg.. Now thats a combo of old(read:classic) and new.. I guess its not a team up (a la Fantasmic's villains) because that would be rather surreal.

The show is sounding very nice.

this sounds so amazing! im really excited to see chernabog. thanks for the update, now we have more knowledge of what it is actually about.

Oh nice, so Cars Land is the only original addition coming to DCA?

I also hate to say it, but this new water show sounds very generic. The reports sound like it will touch on all the usual characters without anything really new to say.

I guess they hope it will be able to suffice for many years without need of updating, and also capable of being dropped into any park that has water.

so chernabog will be present in both water shows at the resort? i can think of so many unused disney villains that could be in it.

I'm not a fan of shutting down all the attractions for it.

Shut down Screaming, the fun wheel, the swings, and the zephyr? Sheesh... that's pretty much the entire life of the entire western side of the park.

can't wait! Finally something that is not themed to magic,dreams, or imagination. It's going to be great!

Can you imagine Bellagio shutting down the slot machines during a show?

WOC should have at least 2 shows a day. What are they thinking?

Where in DCA are they going to suspend the old house on balloons? And what's taking the Ratatouille restaurant so long to be built?

^I don't know...but the house on balloons would make a great parade float...;)

Screaming is the only real high capacity ride that is down.
You will still have Carsland, Soaring, Mermaid, TSMM and Hollywood open for the last 30 minutes of park time with 7-10K people watching the show so lines should still be minimal during that time.

So am I missing something or did you not answer the original question(s). Is World Of Color going to be put in DisneySea?

And, what was that about the largest bathrooms?