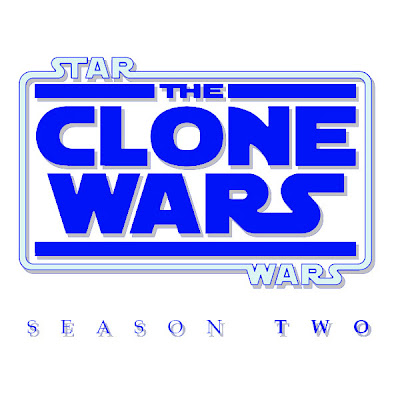 Well, George Lucas' "Clone Wars" series has gotten a green light from the Cartoon Network for a second season...

I have to say, the series is good most of the time(Just stop with the Gungans, already!). I just don't know what they were thinking about when they released that horrid theatrical film... it should have been buried, not shown in theaters. The series has turned out to be a surprise I must admit. But, I would love to have a little less of the Hanna Montana Padawan, pleeeeeeaase?

Groundbreaking Series Ranks #1 in Its Time Period With All Boys Demos Across All Television—Broadcast and Ad-Supported Cable, 2008 and January 2009

After debuting to record numbers and claiming the #1 series across the entire basic cable landscape in 2008 and through January 2009 with boys 6-11, Cartoon Network announced today that it has picked-up a second season of the hit CG-animated series STAR WARS: THE CLONE WARS, from creator George Lucas and Lucasfilm Animation. Slated to premiere in the fall of 2009, the second season will continue to take audiences on new and exciting adventures, combining the legendary storytelling of Lucasfilm with innovative animation. The season one finale of Star Wars: The Clone Wars airs on Cartoon Network Friday, March 20 at 9 pm ET/PT.

“Star Wars: The Clone Wars is like nothing else on television and has delivered for us on all levels,” said Stuart Snyder, President/COO Turner Animation, Young Adults & Kids Media. “It has helped us launch a great new night of action-adventure on Fridays and build on our dominance with boys. We look forward to continuing what has been a great relationship with George and everyone at Lucasfilm.”

"We're trying to push the envelope even further in the second season," said George Lucas. "In the features, I focused on telling the story of the Skywalker family. With The Clone Wars I'm exploring far beyond that and we barely scratched the surface in the first season. It's exciting to be able to take people to all these new places in the Star Wars galaxy."

The October 3, 2008 premiere of Star Wars: The Clone Wars scored as the most-watched series debut in Cartoon Network history, according to Nielsen Media Research. Since its premiere, Star Wars: The Clone Wars (Friday 9 p.m.) has ranked #1 in its time period on all television—broadcast and ad-supported cable—with boys 2-11, boys 6-11, and tween boys 9-14 through January 2009.

Star Wars: The Clone Wars showcases an entirely new look and feel to the galaxy far, far away, combining the expansive scope of the Star Wars saga with state-of-the-art computer-generated animation. Each week, viewers see a thrilling, 30-minute “mini-movie” created by the talented artists at Lucasfilm Animation.

On the front lines of an intergalactic struggle between good and evil, fans young and old join favorite characters such as Anakin Skywalker, Obi-Wan Kenobi and Padmé Amidala, along with brand new heroes like Anakin’s padawan learner, Ahsoka. Sinister villains—led by Palpatine, Count Dooku and General Grievous—are poised to rule the galaxy. Stakes are high, and the fate of the Star Wars universe rests in the hands of the daring Jedi Knights. Their exploits lead to the action-packed battles and astonishing new revelations that fill Star Wars: The Clone Wars. With a new story each week, Star Wars: The Clone Wars continues the tradition of thrilling stories, astonishing visuals and extraordinary music that have always been the hallmark of the Star Wars saga.

Lucasfilm, Star Wars: The Clone Wars, Lucasfilm Animation and related character names, vehicle names and properties are trademarks and/or copyrights, in the United States and other countries, of Lucasfilm Ltd. and/or its affiliates. TM & © Lucasfilm Ltd. All rights reserved. All other trademarks and trade names are properties of their respective owners.

This show is a steaming pile of Bantha poo-doo. Bring back Tartakovsky. Filoni has the juvenility of Sesame Street.

I knew it was only a matter of time before Mola Ram spoke up...

I will agree that I love Tartakovsky's Clone Wars Mo.

Disney should have nabbed this for Disney XD.

As a matter of fact I do. Lucas needs to stop whoring out Star Bores and let it go. He just keeps running this franchise further and further into the ground. We don't need a live-action Dawson's Creek version of Star Wars either. Attack of the Clones was bad enough.

I am still consistently amazed that fanboys and fangirls still take the time and energy to beat up on George Lucas at every opportunity.

What so many of these folks fail to realize is that George Lucas has engaged an entirely new and younger generation with the Star Wars franchise. They in fact love the prequel trilogy, they love the Clone Wars TV show, they are buying Star Wars toys (especially Legos)and video games. I see my own kids wrapped up in Star Wars, much in the way I was back in the late 70s.

The original Star Wars trilogy was filled with bad dialog, whiny characters(Luke, C3PO) and overly contrived creatures (Ewoks) yet it proved endearing to a generation of fans who seem to have very short memories and zero tolerance for anything that skews out of their very narrow demographic.

I loved Star Wars then; I love Star Wars now. Quit taking it, and yourselves, so seriously.

Why the EFF Lucas doesn't bring back his GOOD SW characters, like Han Solo and Luke Skywalker, and instead focuses on bland, uninspired and insipid new characters is a mystery to me. SW used to appeal to all ages. Now only widdle boys like it. Next Lucas will do a Teletubbies version of SW, with cute fuzzy C3P0 carrying around a purse and crap. SW is dead to me.

Sure--Clone Wars appeals to young boys--that was always the intention. Why should George Lucas do anything to try and please folks like you who have been pissing in his corn flakes for the past ten years?

And whether you choose to see it or not, the reality is that many of his current efforts appeal to adults such as myself. The prequel trilogy generated close to $3 billion, and that didn't strictly come out of the pockets of "widdle boys." Four years after the trilogy's conclusion, Star Wars remains a dominant presence across multiple platforms of entertainment.

And if Star Wars is dead to you, why are you engaging in this discussion at all?