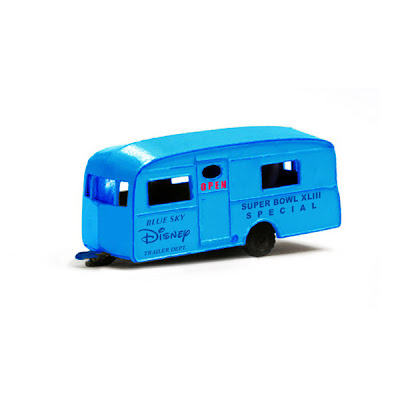 The Super Bowl this year holds very little interest since my team or any other team I even remotely like was in it, so...

As is often the case, the commercials will become the focal point and there will be plenty of interesting new films being promoted between the downs. Some of the studios have already released their commercials on the web. You noticed that Disney released Pixar's "Up" teaser on its website early yesterday and now the Mountain has released one for "Star Trek" here. Dreamworks/Paramounts "Tranformers" sequel is here. The Mountain's cheesy take on "G.I. Joe" can be downloaded here. It's something I'm cautiously optimistic about, despite Mola Rom's criticism of it. And I'm not sure what to think of Universal's Will Ferrell film, "Land of the Lost," which can be found here...

If you don't get to watch the game, at least you can watch the trailers.

Don't forget about the 90-second, 3D commercial for Monsters Vs. Aliens!

Hi Honor , some of the videos of your linkshave been removed from youtube.

However, you still can watch the Star Trek spot here:
http://www.dailymotion.com/SuperBeurkMan/video/x8874z_star-trek-xi-super-bowl-tv-spot-tra_news

and the Transformers spot here:
http://www.dailymotion.com/search/transformers/video/x88704_transformers-2-revenge-of-the-falle_news

Been gone most of the day so I wasn't aware of that...

The Mountain? Paramount? Sorry, just hadn't heard them put that way before.