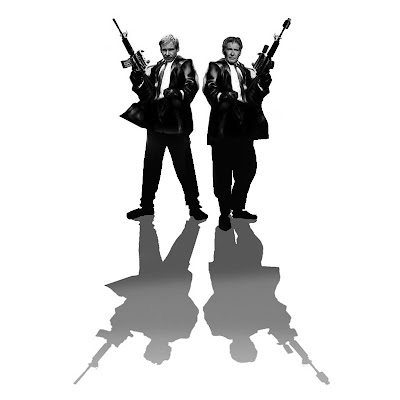 It appears that Curtis Hanson(L.A. Confidential, Wonder Boys) is in negotiations with Disney to direct the long gestating project "Gemini Man" for Touchstone Pictures...

The story, for those that don't know, is about an aging assassin that suddenly finds he's being pursued by another, younger assassin looking to take him down. He finds out that the younger killer is in fact, his clone that the organization he works for has sent out to retired him.

This project has been through so many revisions I've lost count, but it appears the Suits finally have a likable draft. It doesn't mean it's the best draft("I Am Legend," for instance), but if they're prepared to sign Hanson, then they're prepared to go before cameras. Jerry Bruckheimer is producing the flick. No word yet on who will star as the assassins, but the project has had everyone from Harrison Ford to Mel Gibson attached.

My vote's for Harrison Ford, and that they use whatever technology they're using in Tr2n to digitally youngify Jeff Bridges.

I don't know, I might go for a newer actor like Russell Crowe, who's worked with Hanson on Confidenial before. Have a younger Crowe like the way he was in Romper Stomper against the one we saw in Gladiator. That's my idea of a battle!

Harrison Ford, LOL. Maybe Lucas should have used the Tr2N digital de-aging software on Indy in Crystal Skull. Still wouldn't have made the film any more tolerable, however.

I wouldn't have minded seeing a little less hagard, younger Indy, thank you very much.

But ILM's magic can't be worked on the script. I think that involves a little different magic.

So in the next few years we have, John Carter, Prince Dastan of Persia, the Lone Ranger, Captain Nemo,Jack Sparrow, Tron, Benjamin Franklin Gates, Gemini Man, and Surrgogates to look forward to as well as Witch Mountain. Think Disney is trying to beef up it's action slate?

.. well, with Disney XD in the scene, why would it not? Disney also has ties with Stan Lee.... they also built a new comic book company as wll..