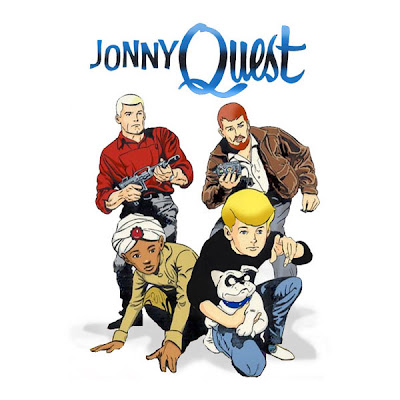 I don't like being negative. I think it's way too easy to go around being that way. You'll find it far more probable that someone says "no" to something. It's just the easier way to do things in life.

The rumors are going around that Zach Efron(High School Musical) is going to be playing a certain iconic youth in Warner Bros. live-action "The Adventures of Johnny Quest" and I just have to say something to the Suits. Wait. No, I have to watch my language since yung'ns might be around. But do these WB Suits actually have functioning brains or did God somehow forget to install them? Sorry, I can't blame God for the behavior of Suits. But I for the life of me can't understand why we can't find more producers that "get" a project like this. Johnny Quest is a twelve or thirteen year old boy not a seventeen or eighteen year old boy. Which I might mention that Efron doesn't even look like anymore... I'd have trouble buying him as a freshman in college, much less high school. But the whole point about Johnny Quest is that he's just entering puberty. He's on the cusp of adolescence and he's not really into girls yet. He's into adventure and travelling the world with his dad and pals. If they truly are offering this part to Zach then they're going a whole other route. One that I don't care for. I also know that there's talk of having Dwayne Johnson play Race Bannon and while I don't really think he's right for the part, I can understand the casting there. But Zach Efron? Really!?

And I can tell that it's probably going to be a modern take in a modern setting. If I were doing JQ, it'd be set in the early 60's like the classic animated series. It's set in a more innocent time when these adventures were more believable. A time of optimism where the world that awaited us was scary and exciting, but also positive and fun. Setting it in contemporary society does nothing for the story. It's clear that the people in charge over at Warner really don't know how to protect their own properties. If they put as much care into Quest as they do Batman then I wouldn't be worried about this one. My fear is we've got another misfire on our hands here, just like "Superman Returns" was. But I really hate being negative. It makes you feel so old, like you've become your dad... or granddad. So I'm going to just shut up now.

See, your Honor? Maybe now you'll understand why I have such contempt for Lucas and why I am bitter about such aboninable attrocities of celluloid like Stephen Sommers' G.I. Blow and J.J. Abrams' Star Dreck. There's nothing worse than having your most beloved childhood characters eviscerated before your very eyes.

Honor, the least you can do is stop picking on Zac Efron!

And if he does successfully make the transition from kid roles to adult roles (a la Kurt Russell, Annette Funicello, Brooke Shields, Drew Barrymore, etc.), it'll give people like you an even bigger reason to apologize for putting them down so much.

So sad. I have a great JQ T-shirt (I'm a 60's child) and my buddies and I started casting a JQ movie for fun last summer. I had Kenneth Branagh as Dr. Quest. I like Efron okay, but think he is too old for this role. Is he going to sing and dance?

I think this is another example of Hollywood just buying the title and throwing all the character development out the window.

I agree with Honor on this one. Set JQ in the sixties when lasers and rockets and hover craft were new and cool.

I'd personally rather see Jason Statham or Jeffrey Donovan as Race Bannon. Race had that cool detached tang a la James Bond that Johnson seems to lack. Statham and Donovan swim in the stuff. What the heck is WB thinking here?

I just don't see live action JQ as workable. Many of the classic Saturday cartoons have not translated well and I fear Jonny Quest will be another one, if the original setting and premise isn't maintained in the process.

Well, if something really needs to be criticized, I don't see what age has to do with it. If anything, I've found these young teenage bloggers are critical of anything and everything they can think of, with no real substance to their arguments. But I digress.

It depends on what version of Johnny Quest they plan on doing. Even the WB wouldn't miss the mark by that much if there was only the original series to draw from, but they may be thinking in terms of the last series, where Johnny and everyone are all teenagers. Not a good idea, but you know how executives are about marketing.

Though I think Dwayne Johnson is perfect for Race. Other then the hair color, they're practically twins. (If you can be a twin with a 60s animated doodle. But again, I digress.)

Annonymous said
>>>Honor, the least you can do is stop picking on Zac Efron!

Nobody did. He said Zac Efron is too old to play a 13 year old. Which is correct, he's 21 and he doesn't much look like a teenager anymore to get away with playing him around 18, which isn't in the spirit of the original series. How is pointing out he's growing up making fun? Oversensitive on the subject a little, aren't you?

oh yes I went there...
Make that a movie and now we are talking...

Wow, this has Speed Racer written all over it except worse, like Underdog.

What's with all the hate for Speed Racer?