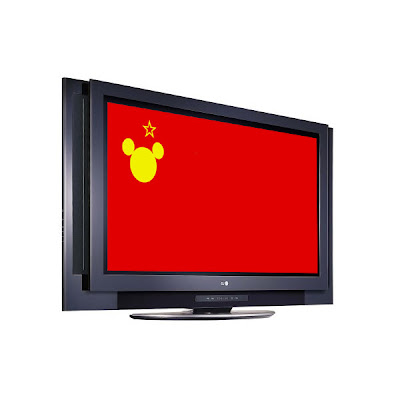 The Mouse has acquired a forty-nine percent stake in the Russian Network, Media-One TV for the paltry sum of $233 million. This is to make sure that the Disney company has inroads for the products it makes on television. The company has had a presence in Russia at theaters for years now. The investment will be used so that Disney movies and television productions, as well as original Russian content can be shown in the former Soviet Union's biggest player...

All part of Iger's global strategy for getting the Mouse in every part it hasn't quite found an open door yet. Is this the end of Disney capitalism? I say "Nyet!"
Posted by Honor Hunter at 10:59 AM

Or maybe you would say "Nyet."

And thanks for the compliment...

Can anybody in Russia even afford HDTV let alone gas?

How dare you desecrate the Soviet Union's flag with that mark of Imperial Capitalism!

Disney has destroyed so many cultures with their manipulative marketing and greedy desires.

Che Wha makes a small point. Why not use the Russian flag instead of the Soviet flag? The Soviet Union was socialist and Russia is capitalist.

The old flag was better looking.

che wha? why would you read a Disney blog if you don't like Disney...

I'd say the reason Honor uses that flag is Russia is acting more and more like the old Soviet Union than a freely elected democracy that believes in capitalism.

Well according to the Cars 2 plot premises and choice of villain that's been circulating in house, Disney won't be doing too well in Russia in the near future. I'll just say that things veeeeeery heated between Lasseter and Disney Russia's rep during a presentation of the Cars 2 story in a global markets meeting a few weeks ago, causing Lasseter and co. to change the story a bit, though still not to a satisfactory degree.