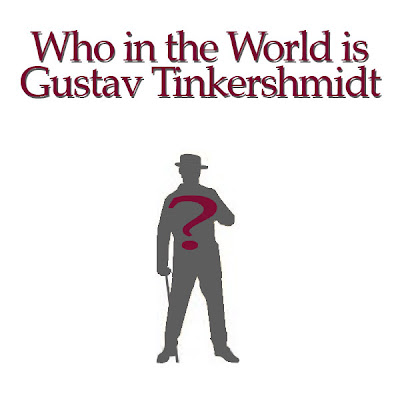 Now that the games of the boardwalk are open I thought I'd give you guys a hint of Paradise Pier's future...

If you've been to see the games you've notice how much more themed they are than the stucco Pressler nightmare that was there before. They are everything that the games before were not. And did I mention they're beautiful?

Well if you happen to walk past that Bullseye game you might want to take a look at the window front above it. The one on the left has signage that says: "Gustav Tinkershmidt: Proprietor" and it's a very telling storefront.

Who is Gustav Tinkershmidt? Well, he's the new owner of the Boardwalk. He's the one responsible for all the upkeep on this lovely pier. And when you ride Mickey's Fun Wheel when it opens next month you'll get to hear his voice. That's because his voice will be the one you hear while waiting in the queue line. Those of you that had fears of having Mickey's voice blast out of those speakers all day can put your mind at ease. The voice will be that of the new owner of Paradise Pier.

As work progresses on the World of Color nighttime show, many have been wondering what that big black structure is down in the water. Some people don't realize that it's where the more than 2000 jet nozzles will shoot water into the air. Water sculptures creating the illusion of magic will spread a wonderful new show this time next year. That structure down in the pier is how it will look when it's submerged during the show. After the lights go up and everyone has exited, the entire structure will rise from the water so that maintenance crews can inspect everything without having to do like the ones at the Bellagio do. They have to send scuba divers down to inspect it.

Also, the stores are supposed to go down this fall after the rush of guest from summer are gone. When they go down, the Orange Stinger will go down as well to be transformed into the Silly Symphony Swings. As work starts over where the former burger joint is, you can expect that the Victorian theming restaurant to take its place. But the food eatery will be a grill, not the Beer Garden that some were expecting. It will be themed to match the area though, no stucco, thank you.

Work continues on the new tarp and paint job for the Carousel as well as a new camera system for Cast Members to watch the back of the attraction without having to walk around it. The plan is to hopefully put a permanent structure atop the attraction near the end of Makeover, presuming attendance and sales will warrant it.

Come this time next year, Paradise Pier will be a dramatically different, much more layered area of DCA. A more decidedly Disney area of the park. One that guests have always expected, but soulless, bean counting Suits stupidly thought you wouldn't miss. Not to mention it'll have a back story. Something else that was missing when the park opened eight years ago.

The entire area won't be officially finished until about two years from this summer when the Little Mermaid attraction opens up. That along with the remodeled Princess Palace are going to make this area the place to be... for about one year. Then the jewel, Cars Land will open up(I still wish they'd call it Route 66). But that's a story for another post at a later date.


Three year years from now, the Second Gate we deserved will be opening. It will still need a little more TLC, but at last a Disney worthy park will reside across the Esplanade from Disneyland.

Do you know when they are getting started on the entrance makeover?

The Gustav Tinkershmidt back story just made me soo happy. Maybe there is still some life in WDI. We just have to wait and see.

I love every new step in this makeover. A backstory to PP, who had ever imagined...

Hey, any ideas on the roller coaster or Maliboomer? One thing that is terribly noticeable now is how bad they look compared to the redone stuff...

At least some paint or something...

Will the spouts for the water jets be visible during the day?

Good to know there is progress.

Would like to see show before and afters for comparison on various parts, such as the games.

Honor, this is very good news. Paradise Pier is becoming what it should have been at opening. As I have been compiling concept art for a future post on California Adventure's transformation, the differences between 1.0 and 2.0 are astounding. Who would have thought the Pier could ever be beautiful after the mess they started with?
Mark
www.InsightsandSounds.blogspot.com

They gonna get rid of the Muppet attraction? What an awful eyesore.

O so the submerging is only for maintenance purposes. You can definitely see the pontoons under the decks which will float the whole thing up. Really cool. Plus the water will probably be plenty murky to not reveal the machinery during the day, unlike Bellagio. Awesome.

For some reason I imagine Gustav's voice sounding like Daniel Plainview on There Will Be Blood haha. I know silly but I just imagine that being the case. Hopefully they work him into the spiels on existing rides like Screamin' No more "get ready screamers!"

Paul Frees should have done this character's voice. I would hire Corey Burton to do it.

Ladies, gentlemen, boys and girls, step right up, it spins, it grins, it's Mickey's wheel of fun.

I would love to hear about future plans (if any) for upgrading California Screamin'. Weren't they going to theme the queue to a funhouse at one point? I still have great memories of the funhouse at Lagoon in Utah before the lawyers made them shut it down. I think a funhouse setting would add a great deal to the ambience of the pier.

I'm pretty sure Honor's referring to the entire DCA makeover.

This sounds like it's really shaping up. Also, agree that "Route 66" is a better name...but looking forward to its opening anyway. Another gem of an article, Honor. Thanks

I am so glad that WDI and the Disney Team are making DCA into a Disney Park rather than an off-the-shelf (feel and look, and in some places, construction/installation)park. I can't wait for the changes small tweaks all the way through Carsland.