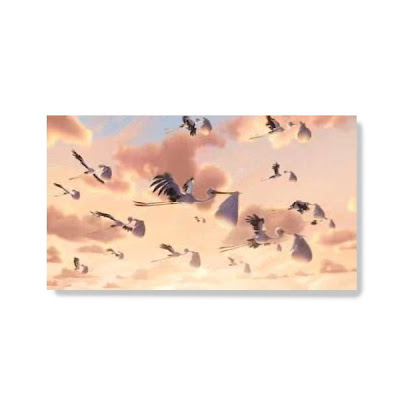 You know, as much as I'm looking forward to Pixar's "Up," there are several other exciting jewels that will come with the Lamp's next release...

I'm probably just as excited about the trailer for Disney's first hand drawn film in half a decade, "The Princess and the Frog" and then there's that new Pixar short directed by Peter Sohn, "Partly Cloudy."

The Animation World Network has a 30 second clip of Cloudy and it looks stunningly beautiful. I've had a few e-mails from those lucky enough to have seen this short and they all seem to agree that it's classic Pixar and also a fresh, incredibly sweet and charming step into new horizons. At least for a short.

It looks like it's based on a tired old gag to me.

It's the opening scene from 'DUMBO'...How original!

The clouds didn't make clouds in Dumbo. They just came down from there to deliver them. How about this, we watch it FIRST and then we JUDGE it.

'Everything old shall become new again'

The storks reminded me of the seagulls in Nemo.
Baby Mine. Mine. Mine.

Cloudy with a chance of babies.