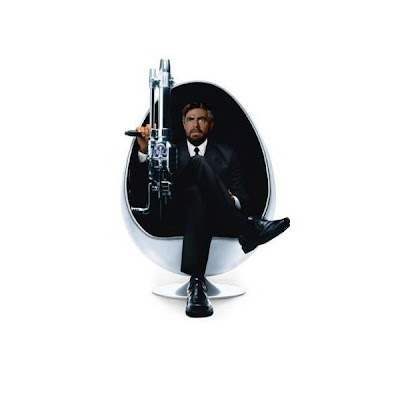 And Sony's presentation may hold a jewel for the Mouse as well, or at least its fans. See, Sony announce that they're intent on making "Men in Black 3" and having it out for 2011. Now with Mr. Smith's busy film schedule, were he to commit to this production it would be difficult(but not impossible) for him to film the prequel to "20K" that McG wants to do. Which means he wouldn't get to be involved in this or the other two scripts for a trilogy that Disney Suits want to do(two of the scripts are already done, btw).

Now should this good luck charm known as MIB happen, I'll probably go see it just thank the Suits over at Sony for preventing some disastrous casting over at Disney's lot. Keep your fingers crossed and hope for a sequel.

One that's not a Disney sequel...
Posted by Honor Hunter at 7:57 AM

Good plan. Let's keep the talented Mr Smith busy with other projects so that he won't have time for 20,000 Leagues. Buy his records so he might go on tour, get him to host some awards show, start work on ID4-2, Hancock 2, I Robot too, MIB 3, Sharktale 2, just until this 20,000 Leagues thing blows over.

Just because McG didn't cast Smith doesn't mean he can't find someone else completely inappropriate. And Disney already has 2 scripts of the trilogy, when filming of the first hasn't even started yet?? Jeez, they're jumping the gun a little bit...

Agreed. But you have to dodge the first bullet before you can dodge the second...

While I completely agree that Will Smith would be miscast as Nemo, I also have to remember that Disney is a business. Can you name any other actors that can open a film with numbers like Will Smith? I'm not a fan of his, but I can see why he would be considered for the role. I read an early script review for this film and have to admit I found it lacking. Do we really believe that kids, teens, and young adults will turn out for a 20,000 leagues film? There would have to be plenty of major special effects for them along with a compelling story. I was also concerned about Disney's remake of the Lone Ranger until I read where they're giving it a Pirates-like supernatural element. Like it or not it's hard to rope the crowds into theaters these days. The studios will use every trick at their disposal.

They have two scripts already because they've been developing them for years. This isn't a audden thing, and they want to really DESIGN these pictures so they're not slip-shod-slapped together. It shows more integrity in the process, and more respect for your audience, if you're trying to develop an entertaining and smart franchise.

Is it established that they re talking Smith for Nemo? It seems like he'd be perfect for an update of the Kirk Douglas role.