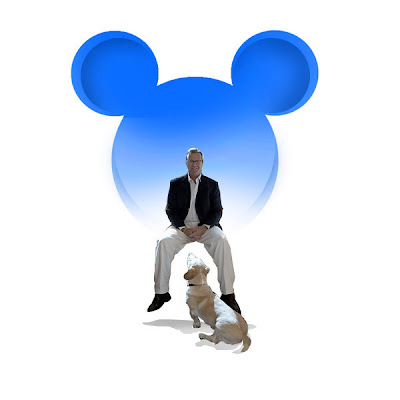 You know, one of the reasons I'm glad to see John Lasseter in charge of the Mouse is that he has a vision of clarity that those before him did not...

One of Eisner's biggest mistakes in the mid 90's was putting some truly incompetent morons in charge of divisions that they knew nothing about(Pressler anyone?)

One of those Suits that was a glittering jewel of ignorance when it comes to animation was the head of Walt Disney Feature Animation during the latter part of that decade. David Stainton, whom appears now to be suffering from delusions of grandeur and is in the process of a complete whitewash of his tenure as head of the Mouse's animation division. We know that many people pad their resume, but I think Stainton isn't just padding, he's creating it from whole cloth.

I believe the propagandist in the old Soviet Union would be proud of his revisionist history. One would be hard pressed to find any negative attention to the turds he cranked out while there. No mention is also made of how demeaning and belittling he was to the talent. He was the Anti-Lasseter to be quite blunt. But with all his blathering on his new website, you wouldn't know this, somehow facts seem to get in the way of men like Mr. Stainton. History thankfully, doesn't and won't be so kind to such pompous egos...

Hat Tip to Cartoon Brew.
Posted by Honor Hunter at 12:00 AM

Funny that someone who has spent such a long time at Disney would: A. Use Disney images on his private website, and B. not even bother to add the copyright... I guess he is too big to bother with such meaningless legal stuff. He after all IS Disney... not...

So this yutz takes credit for "pitching" Victor Hugo's Hunchback of Notre Dame? Like they say, if you're going to have an ego, have a BIG ego.

I don't think his resume is guilty of "revisionist history" the things that he claims actually happened. But as most people in the hat building at the time all knew, he was just a puppet- and all those same things would have taken place regardless of who was at the helm.

And, I believe the site has been up for a few years now. Which would explain why he has American Dog on his resume and not Bolt... Honor just happened to see it from a Cartoon Brew post the other day. This isn't new news.

Lord almighty, what is it with folks hating on Hunchback?
It has always been one of my favorites from the late 90s...stunning music (some of Menken's best), drama (for a change), and a beautiful story. Still don't get why so many hate it?
It's always the ones you grow up loving that fandom and/or industry says are a no-no...

A priest lustfully sniffing a woman's hair in a Disney animated feature?

I wanna pitch "Schindler's List" as an animated musical... it's in that realm.

Yes, this is a very old website and has not been updated in years. Not sure why people are beating such an incredibly dead horse. Cartoon Brew made a mistake by labeling it a "new" website...now the negative energy is making the rounds. Too bad, I hear there's a really good guy running Disney Animation now...and a great film coming out from Pixar. But, let's trash some old canceled TV shows in the meantime.

"creative executive" can be the guy who photocopies storyboards for the story reels and animatics. Very clever stuff there, the way he pads his resume.

Flake flake flake. And he had no substantive connection to the creative heart of animation.

Yes, this is a very old website and has not been updated in years. Not sure why people are beating such an incredibly dead horse. Cartoon Brew made a mistake by labeling it a "new" website...now the negative energy is making the rounds.That's one reason why I've become so comtemptious of the Cartoon Brew blog and of Jerry Beck. They're way too negative, mean-spirited and one-sided.

Was this guy really like that? Man, he sounds like an eveen bigger idiot or as big of an idiot as Michael Eisner. Bottom line, DIsney now has the best staff ever for making dreams come true, and with lasseter bheind it all, DIsney can't go wrong.

I think even Lasseter has a few more strings attached to him than he would like. Hopefully that will continue to change.