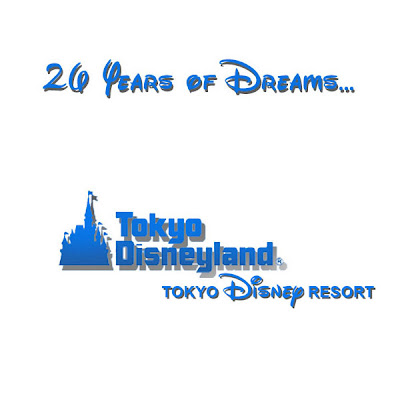 Today, the first Disney theme park to be built outside America celebrates its twenty-sixth anniversary...

Tokyo Disneyland, which is now part of the larger and more elaborate Tokyo Disney Resort moves out of its silver celebration and heads toward the big 30. It'll be interesting to see what becomes of both parks by then. But four years can pass like the blink of an eye.

Up until a decade ago TDL was thought of as a great Disney park with excellent service and somewhat cleaner than the state-side parks. But then they wanted to improve on their park. They wanted to expand. A second park, some hotels and a shopping district... oh, and a couple new rides for the original park. About this time the Suits that had settled in at TeamDisney Burbank(whose last names were Scrooge), began to skimp out on the budgets in Anaheim and Orlando. But the Suits at the Oriental Land Company had grand plans. It's kind of interesting to note that the majority of the problems we have with the American parks began around 1996/1997 and continued through 2005... not even a whole decade, but the decline over eight plus years did take it's toll; both physically(the parks) and phycologically(the fans).

After a tussle with Eisner over what kind of park they wanted, they began creating experiences that Disney fans in the U.S. could only dream of(all of this is P.L. - pre-Lasseter). When Eisner finally gave up on pushing his "Disney-MGM Studios" clone and let WDI loose the whole Disney world changed. First, the Tokyo park got "Pooh's Hunny Hunt" which amazed guest and then it got a great new hotel(the Disney Ambassador) and shopping complex(Ikspiari). Then it got the jewel in the ring with its Second Gate(Tokyo DisneySEA) and adjoining hotel(Tokyo DisneySEA Hotel MiraCosta). From then on everything that Disney has done has been made in comparison to what Tokyo has...

I love TDL, it's filled with such wonderful attractions, pleasant atmosphere and attentive Cast Members. Blue Sky Disney wants to thank the OLC and WDI for creating a place where you can not only dream, but see those dreams built into towering examples of what Walt would have been proud.

Happy Birthday, Tokyo Disneyland!
Posted by Honor Hunter at 12:02 AM

Honor now that Tokyo Disney has officially announced the opening of Monsters Inc., is there any news on whether or not they will go ahead with the Tomorrowland makeover?