There And Back Again And Again... 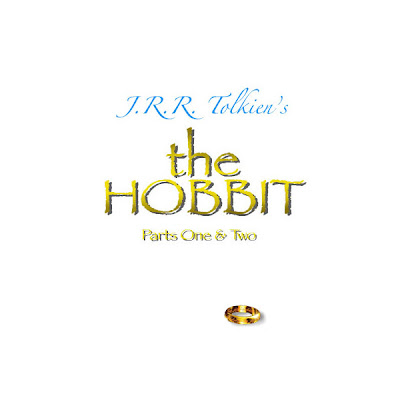 Soon, Empire Magazine will celebrate it's Twentieth Anniversary and they've turned the editorial reigns over to none other than Steven Spielberg, you remember him don't you? He's the brilliant director that made that mediocre Indiana Jones film last year...

Well anyway, he got some interesting things and juicy scoops for the issue. One of which is that Guillermo Del Toro and Peter Jackson have decided to turn "The Hobbit" into a two-parter. So that film will be broken in to two epic films so as to not have to strip away as much of J.R.R. Tolkien's brilliant prequel to "The Lord of the Rings."

No word on what will become of the other film that they were going to do back to back with this one. That "bridge" film is supposedly still a go, but nothing has been said about it lately.

I know Disney was hoping that "Narnia" would wind up being their LOTR, but that didn't pan out unfortunately(it was never that type of property, Suits...). I've got some thoughts about what and where they should turn next in an upcoming post next month.

Narnia COULD have been "that kind of property", but it was mishandled from the beginning by mediocre talents. Narnia deserved the full Disney treatment. Walden Media specializes in blah family films with bad art direction and lousy scripting. What happened to C.S. Lewis' immortal books was a tragedy. Maybe someday a studio with guts will make a truly good Narnia film. (I personally would love a version animated in 2D!) And for the record, I didn't read the books for the religious allegory. I read them because they were freaking damn good.

I wish Disney had had the rights to LOTR. That way we would have already gotten an attraction based on it. That would have been sweet!

I always felt like The Hobbit was a two part book. It makes sense to me to turn it into two separate movies.

Of course it will be in two parts. Peter Jackson wouldn't know brevity if it smacked him in the face!

Actually, I think both of the Narnia films are quite good and solid adaptations of the books. And the first one is one of Disney's highest grossing all-time films, so it definitely had potential to be a great franchise. As I've said before, Disney botched the release date and marketing for "Prince Caspian" and that was that. We'll see if Fox gets it to bounce back with "Dawn Treader".

Bolomun- Disney did have the rights to LOTR, thru Miramax. But Eisner didn't want to spend the money and turned it down. All for the best, though, as Miramax was going to cram it into 2 films.

Yeah, definitely agree with the previous users that Narnia "could" have been that sort of property. Is it just like Lord of the Rings? No, of course not. But no other fantasy series was anywhere near as well set up to be the next LOTR as Narnia was.

Overall I like the films, but there's no doubt they could have been handled even better. I don't believe all the talk that the fantasy film boom is going to die down in the next few years (greedy studios will keeping tyring to find the next Harry Potter and in a few years, the next Hobbit) but if any series was going to replicate The Lord of the Ring's success it was going to be Narnia. Aside from LOTR and Potter nothing can compare to it in terms of popularity: 120 Million copies sold, and 50 years of established fans. Disney had their chance and they blew it.

I'm also very curious what Honor meant about "where they should turn next". If he meant what fantasy series they should turn to next then I'm EXTREMELY curious. I have a few ideas myself, but there's one series in particular that seems like a painfully obvious choice. I wonder if we're anywhere close to being on the same page?

i thought indiana jones was great! i don't care what people say about it beig apparently bad. it was great!

Still bored of the rings.
Kevin Smith summed it up aptly: 3 movies about walking. (zzzzz)

Narnia was 'that kind of property' for the only 2 books that fit the big screen properly. Disney made an excellent move to back out now that the films will lag as badly as the rest of the books.

Narnia was 'that kind of property' for the only 2 books that fit the big screen properly. Disney made an excellent move to back out now that the films will lag as badly as the rest of the books.Apparently, you've never read The Last Battle. It's by far the most action packed and epic in scope out of the series, and, according to C.S Lewis himself in "A Field Gudie to Narnia", it's the one that Tolkien felt most resembled his own work, despite the heavy allegorical tones.

I read it. And that Tolkien likens it to his drivel is spot on commentary, IMHO. And just like the eventual ending of LOTR, it takes WAY too long to get there. zzzzz
Disney did all it could within its oeuvre regarding Narnia then wisely let it go. Disney operates best with more ancient public domain characters which they can reshape to their needs (Pan and Pooh are the exceptions, sort of). They were stuck with Narnia and would have been severely limited with LOTR to recreate almost exactly what's on the page. It's just not what they do best. (It doesn't translate into a dark ride or plush.) And no child is as eager to hug a hobbit as they are Mickey.

I understand Disney was aware of LOTR from early days of its publication, but didn't buy in on the grounds it was too epic, had too much death and violence and villains that weren't domineering women.

Really Disney only does well with public domain material? Because like you said Peter Pan wasn't public domain. Neither was Bambi. Or the Sword in the Stone. Or 101 Dalmations. Or The Rescuers. Or The Fox and the Hound. So yes, Disney works just fine with literary adaptations.

Anyway the whole point of my original post was to respond to your statement that Disney had already filmed the only two LOTR-ish books in the series. Since Tolkien himself diagrees with you I think that's a pretty fair rebuttal.

"Still bored of the rings.
Kevin Smith summed it up aptly: 3 movies about walking. (zzzzz)"

That's because that fat-ass hack couldn't walk a mile if his lazy ass life depended on it.

Tolkien himself disagrees with me.
Hmmm.

1. Pretty good, for a dead guy.
2. Somehow, I'll manage to still sleep well tonight.
3. WWTD? is not a phrase people who have actual lives live by. I'm just sayin'.

Back to your DnD and cosplay, grasshopper.

Hmm... curious I don't think anyone said WWTD. You make it out like I'm some huge Tolkien fanboy that's outraged that you dare to question his brilliance. That's strange since I haevn't said one word as to whether I even like his writing or not. I merely heard an inaccurate statement, and pulled a quote from the author in question in order to counter it. You'll manage to sleep tonight? Wonderful, why wouldn't you? I think you're trying to create a flamewar where there is none.

If it didn't bother you and you don't want to start a flamewar then why continue to respond?

It's too bad peter jackson isn't making this, he said it was because it would take way too long if he did, that shows he cares what the fans want, they want the movie now. personally, I'd like to see jackson return but Guillermo Del Toro is probably the next best thing. He's one of the most visualized directors out there now. If you ever see Pan's labrynth, it's beautifully done, so imaginitive, I'm surprised a lot of people don't like him because he's a brilliant filmmaker after Pan's labrynth and Hellboy II. It seems a bit weird to put it into two movies, but I'm in no position to judge Guillermo from his work, which Ithink is brilliant. I can't wait to see this, plus Jackson is supervising everything so we won't be dissapointed becuase he's got creative power as executive producer and the original writers with him. Can't eait for Guilldermo's version of Frankenstein, Dr. Jekyll and Mr. Hyde he'll do for Universal in the great vein of the Mummy remake and the upcoming Wolfman remake, which looks phenomenal, the only good horror remakes out, Universal's old ones are still the kings and evetyhting else is just a poor exuse of a movie for running oput of original ideas.

Wow.
Talk about being a fanboy.

"Back to your DnD and cosplay,
grasshopper."

"WWTD? is not a phrase people who have actual lives live by. I'm just sayin'."

Dude grow up already, it's not like anybody even insulted you or anything. People are actually being pretty polite considering how you're acting. It doens't even sound like people are really arguing with you they're just responding to be polite. You're the only one trying to start anything.