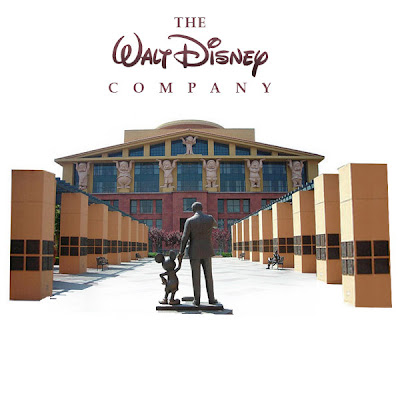 With Time Warner spinning off their cable division the company is no longer the top/largest media company in the world. Actually, they're not even number two... they dropped to number three on the list behind number two News Corp.

That leaves the number two largest corporation, The Walt Disney Company at number one. Disney is now the largest entertainment company in the world. Walt Disney Productions has come a long way from the little animation start-up that Walt and Roy founded back in 1923. Imagine Jack Warner and all the other Hollywood moguls who thought Walt was just some guy that made funny cartoons. His company now dwarfs their own.

I wonder what the Maestro would think about how far his company has gone? I know he wouldn't find it perfect(EPCOT isn't exactly what he had planned), but I do think he'd be impressed at what Roy and he created and how it's affected the world...
Posted by Honor Hunter at 12:02 AM

I don't think Walt would be too happy actually. It was never about being big.

I agree with anonymous there, but then again Walt - from all the accounts I have read - was, if nothing else, driven.

If nothing else though, if Walt were still alive today, he seemed so intent on providing his costumers with value for their money (so midwestern). I, again, don't know the man, but "greed" has never been a word I would associate with him the way I do with the company that survived him.

So is this the first time TWDC has been ranked #1?? Or are they BACK on top?

I think he'd be extremely mad about Disney Channel and Disney XD. I mean Hannah Montana, Jonas brothers, and that corny superhero show on Disney XD? ad Aaron Stone? The guy in Aaron Stone is weird bad at acting and looks funny in a lot of shots!

True, but i'm speaking for my friend's son too. He hates Aaron Stone.

Walt's own surviving family members aren't too happy with the way things are. It's not rocket science to know what Walt stood for and to realize the Co. has moved pretty far away from that is many regards.

And being the largest media Co. in the world doesn't equate to "Universal Approval."

Walt probably would have brought the company close to bankruptcy a few more times with his mad schemes.

EPCOT may have actually bankrupted Disney in it's true form, but it would have changed the world forever. Personally from reading so much on Walt and how he ran the company, he really wouldn't like some of the stuff the company is doing today. PIXAR however...

In the Walt Disney Co's defense. Or more specifically in Bob Iger's defense. Alot of what is wrong with TWDC can be laid at Eisner's feet. And it took him 20 years to do it, so it will take Iger and Co more than 2 years to fix it.
Although this accomplishment is mostly Eisner's doing. His purchase of ABC went a LONG way in making TWDC number one.
Just look at what Iger has done since he took control.
Bought Pixar and brought John and Co back home. (and gave John and Co greater control)
Is in the process of remaking DCA, Studios Paris and trying to fix HKDL.
Is returning the Studios to a more family friendly place
I think Bob's GREATEST asset is he leaves the business units (and their managers) to do what they do best and to get out of their way. Unlike Mr "I have to do everything" Eisner.

Walt would have looked at computer animation and creamed in his pants, to put it bluntly.

Here, here! I totally agree. The company is still doing a great job of maintaining Walt's vision and continuing his "Keep Moving Forward" mantra at the same time.

I think Walt would be pleased with how his company is today. Then again, he's no longer in this world, so we'll never know for sure.

And, although we'll never know, he'd probably like some of the things that Gabriel bashed even, which, IMO, do not deserve the constant merciless mean-spirited diatribes that constantly have been slung at them.

And one should NEVER fall back on the "Walt theoreticals". To quote the 2719 Hyperion blog, "They are always convenient, but rarely with merit".

One should never say never.

I think it's important to look at who in the company tends to generate the most "WWWD"s.

I don't think I have ever read or seen one in conjunction with, say, Jon Lasseter, (I mean, I bet they are out there... I don't see them), but bring up names like Pressler or Eisner and it's like a stampede of antelopes in a narrow canyon.

And, yes, they are history, these WWWD generating men. Here's to what their replacements can create.

Walt would NEVER have bought the Muppets. His own invention, audioanimatronics, beats those old socks by a mile. And he'd have no use for buying other people's characters anyway...unless he could give them the Disney touch, like he did with Mary Poppins, Snow White, and Pinocchio. And of course he'd never have bought the Power Rangers and all that other Eisner-purchased crap either. He would have insisted that his company create its OWN characters. Man I really hate Eisner...

Also, I think Walt would be a bit disappointed that Fantasyland at WDW is so small and dated, for the most part. He'd definitely have gotten rid of the Jungle Cruise. It's a museum piece, almost laughable in its antiquity, and Walt reportedly said "Disneyland is not a museum."

Anonymous, you really need to knock it off with your idiotic Muppet-bashing, as well as any and all bashing in general. Seriously!

Also, stop presuming what Walt would have or wouldn't have done.

The man has been freakin' dead and decaying in his grave for DECADES, for crying out loud!

Actually, he's not decaying in a grave...

His ashes are. ;P

While you're here Honor, how about taking some time to defend and stand up for the Muppets?

I love the muppets and am a fan of them. I think Disney made a good decision. Walt may have made audio animontronics but Jim Henson perfected it with The Muppets!

I love the Muppets...

How's that? I look forward to the new film that Disney is producing.

At least now the project is in the hands of a true Muppet Geek/Fan. That's a very good thing...