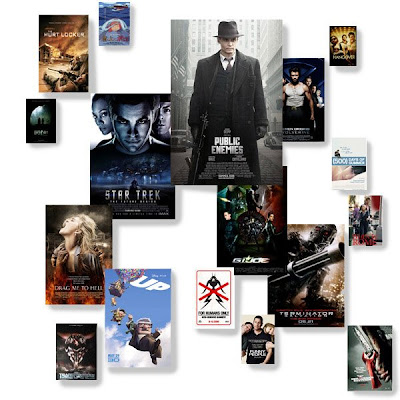 Summer is about to be upon us and time to focus on the films that Blue Sky Disney is looking forward to. In no particular order...

Public Enemies (July 1, 2009) - I'm probably looking forward to no other movie than this Michael Mann directed bio-pic of the crime wave of John Dillinger(Johnny Depp) and his G-Man Nemesis Melvin Purvis(Christian Bale). This is the tops for me this summer, the bee's knees.

Up (May 29, 2009) - Any film made by Pixar is a film worthy of seeing. John Lasseter and his crew focus on story, story and oh, I forgot... story. It looks like Pete Docter has made sure it's going to be a rousing adventure and I like adventure as much as the next lad out there. Plus I can't wait to see more of my favorite character, Dug!

Star Trek (May 8, 2009) - Let me state for the record that I'm not a Trekkie or Trekker, if you want to be specific. I'm a Star Wars type of guy. But this film looks really, really cool. It's got the intensity and drive of a space action film that I've never seen in a Trek film(the only exception could possibly be "Khan")).

500 Days of Summer (July 17, 2009) - Marc Webb's love story that's not a love story starring Joseph Gordon-Levitt(Brick, G.I. Joe) and Zooey Deschanel(Bridge to Terabithia, Yes Man). This is one of those indie films that happens to appeal to my personal taste. Plus I think Gordon-Levitt is a star waiting to break out... could G.I. Joe be his chance? Or will it be at a later date since he missed out on being Spider-Man once Tobey decided to come back for a gigantic paycheck? Either way, this is one of those films I'll search out and catch with a few friends.

Terminator Salvation (May 21, 2009) - I never thought I'd willingly go see a film by McG, but the Michael Bay on steroids style slick shots I'm used to seeing from him are missing in these trailers for the next Terminator film. Add Christian Bale to the mix and I'm curious to see if he can pull off a film that I'll not only like, but love. And I can't help mentioning it one more time: No Will Smith, McG!

The Hurt Locker (June 26th, 2009) - Katherine Bigelow's(Near Dark, Point Break) take on the current Iraq War without any political slant, just a good old fashioned action-adventure film. Something she's darn good at doing. I've wanted to see this one since I heard the early buzz about it coming from the screenings it's had. It's supposed to be a heart stopper from start to finish. I'll be there.

Transformers: Revenge of the Fallen (June 26, 2009) -
The Brothers Bloom (May 15, 2009) - And while we mentioned Michael Bay, let's focus on what the real one is doing. I'll be the first to admit I thought "Transformers" would suck. I was wrong. At least for me, I enjoyed watching the tale of giant robots destroying the earth. Hopefully the sequel will have more of that and less of Shia trying to score with Megan Fox. But this is definitely one of the big tent pole films of the summer I'll be buying a ticket for.

Harry Potter and the Half Blood Prince (July 15, 2009) - I'm not one of those fans of the books(although I have read and enjoyed the first one), but I am a fan of the film series. I've enjoyed as each one has gotten darker and darker, calling on Harry to reach further inside himself to confront the evil that destroyed his family. I think they've done quite well by the direction Warner Bros. has chosen with the series and this is one Muggle planning on being there opening night.

Drag Me To Hell (May 29, 2009) - Finally, Sam Raimi returns to his roots. I AM THERE. The story of a woman who's the recipient of a nasty curse will give shivers of delight to "Evil Dead" fans all across geekdom. My only worry, or any one's worry, is that the rating will be PG-13. I think it'll still be scary enough to please the traditional Evil Dead crowd as that rating is closer to an "R" than it was a decade ago. I just think it'll have less blood and more scares... which is fine with me. I just wonder if Bruce makes a cameo?

Ponyo on the Cliff by the Sea (August 14, 2009) - Hayao Miyazaki next classic animated piece about an old man who goes on an adventure in his house by attaching balloons to it... er, scratch that. No, it's actually the story of a small mermaid in the sea named Ponyo who becomes a human girl. Along the way, she strikes up a friendship with a young boy named Sōsuke. Long considered a pivotal influence on the development of Pixar, Miyazaki is an animation legend... and one that still works in beautiful, hand-drawn animation. looking forward to it.

Inglourious Basterds (August 21, 2009) - I've read every script by Quentin Tarantino(Kill Bill, Jackie Brown) since he made "Pulp Fiction," but after reading the first ten pages of the ginormous script that makes up this film, I put it away. I wanted to experience one of his films for the first time in a long time without knowing what was coming next. And although Brad Pitt's accent is atrocious, I still plan on being in line on opening weekend to watch some Nazi's get scalped.

The Hangover (June 5, 2009) - Todd Phillips(Old School, Starsky & Hutch) latest film looks like another hysterically funny adventure with a macabre twist. Set in Las Vegas, this comedy tells the story of three groomsmen who lose groom during a night of drunken misadventures. They find themselves with a lost baby and have to retrace their steps from the night before to find him and the answers to this unknown baby.

District 9 (August 14, 2009) - Neill Blomkamp's(who was supposed to direct "Halo" before the studio got buyer's remorse upon seeing the budget) makes a film based on his short, "Alive in Joburg" about aliens having landed on earth and a secretive camp at which they are held. A thinly veiled account of social conditions in some parts of Africa disguised as a Sci-Fi film. It's been getting kudos from all who've seen it in very selected screenings. I'm looking forward to seeing what I could've expected from Halo and the Suits will be as well.

G.I. Joe: Rise of Cobra (August 7, 2009) - Stephen Sommers is pretty much hit and miss with me. While I know he can deliver a fun, action filled yarn(The Mummy), I know he can also deliver a massive, high-concept travesty(Van Helsing). Let's hope this is more on the fun side, because Joe is a story that could be very good in the right hands... the question is are those hands Sommers?

X-Men Origins: Wolverine (May 1, 2009) - Having read the original screenplay for this, I had high hopes. After seeing the preview I've wondered what to think. The trailer looks to be more of a sequel to "X-Men" than a spin off of it. I hope the film is good and am cautiously optimistic. I've had a friend see it and love it. Here's hoping that finding out about Wolvie's past doesn't make me hate his future.

Funny People (July 31, 2009) - Anything directed by Judd Apatow(The 40-Year-Old Virgin), I'm willing to watch. This is the story of George Simmons(Adam Sandler), a successful stand-up comedian that finds he has an inoperable blood disorder and given less than a year to live. Hilarity ensues... under anyone else I'd be doubtful, but Apatow is capable of turning the bizarre and benign into brilliance. I'll be there to see if this one is as funny as I expect.

When In Rome (August 7, 2009) - If Kristen Bell were in a film about a girl that stands there watching paint dry I'd watch it. Ok, maybe that's a bit exaggerated, but you get the point. I'm a big fan of "Veronica Mars" which starred my future wife, errr future ex-wife, errr future ex-girlfriend, maybe? This sappy sweet love story starring her and Josh Duhamel(lucky bastard) is about single art curator in Rome to attend her younger sister's wedding. While there, she finds a coins from a “fountain of love,” and leaves for New York. All the while, she's pursued by a band of wacky suitors whose coins she took. Go figure... it's Kristen Bell. I'm there.
Posted by Honor Hunter at 12:12 AM

Im def psyched for up and hp! they r gonna be great. also im excited to see angels and demons in may. but any summer movie will be hard to beat dark knight!

"I think they've done quite well by the direction Warner Bros. has chosen with the series and this is one Muggle planning on being there opening night."
This plus the 1st comment forces me to ask:
When did this become a gay fanboy blog?
I'm outta here.

Perhaps you can tell me what a gay fanboy blog is? You being the expert and all on it...

I caught an early screening of (500) Days of Summer. Absolutely brilliant film. I hope it is remembered at next year's Oscars.

Also, the sky is blue. Thanks for regurgitating back all the promotional shill from the studios I read everyday.

If you've been a fan of this site for anytime you'll know that Honor always talks about the movies that are coming up that he likes. It's not like he's kept it a secret or anything. And he's just telling you the films he's looking forward to this summer. If you were around last summer you would have noticed the same.

I'm really looking forward to seeing Public Enemies, Up, Star Trek, Terminator Salvation, Transformers 2: Revenge of the Fallen, Harry Potter and the Half-Blood Prince, and G.I. Joe: Rise of Cobra, looks better than Transformers, still good. All look like good blockbuster potentials, and what a lineup, certainly can't wait for the summer of 2011 and 2012's lineup. The blockbuster I think likely to earn the most, we'll have to see, I think will be Star Trek, followed by Transformers 2 and Harry Potter, all look really good and will definetly earn a lot, count me in to see most of them.

"Transformers" did suck. I would have replaced it with Sasha Baron Cohen's hilarious looking "Bruno".

'TDK' would have ruled if they cut out the silly 'x-ray vision' sequence.

Honor is such a tool. LOL.