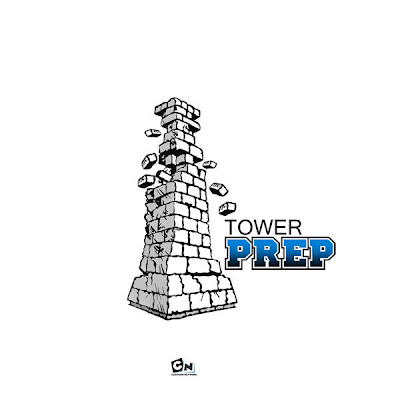 For the last couple of years, the Cartoon Network has started programming live-action series in addition to its animated offerings to try and become a clone of the Disney Channel...

And I've totally been against it. TOTALLY. Until now. Kinda.

Well, there is that rule that goes "there's an exception to every rule." And this is that exception. I don't know if this will be good or mediocre, but it's created by someone of whom I'm a huge fan.

The man is a great writer and has created some of my favorite shows, from "Batman: The Animated Series," his comic book writing, his episodes of "The Clone Wars" and his episode of "Lost," "The Moth," was quite awesome too, btw. Plus there is that animated "Indiana Jones" series he wants to do (Please listen to him, George). Anyhoo.

For you that aren't as geeky as me, the Cartoon Network announced it's schedule the other day and a couple things stood out. One was an animated series by Genndy Tartakovsky called "Sym-Bionic Titan." We'll talk about that another time. But the other series they have coming out that I was interested in was called "Prep Tower" and it was created, produced and written by Paul Dini. My interest was peaked. What is the show about? From the CN press release:

Tower Prep (working title) tells the story of a rebellious teen, Ian (Drew Van Acker), who wakes up one morning to find himself trapped at a mysterious prep school that offers no escape. He forms a secret group with CJ (Elise Gatien), Gabe (Ryan Pinkston) and Suki (Dyana Liu), intent on discovering what they’re being trained for and how to escape. The pilot is executive-produced and written by Paul Dini (Lost, Batman Beyond), with Terry McDonough (Breaking Bad, The Street) signed on to direct.

Color me interested and willing to give it a change. I just want CN to understand that most of us tune in to see cartoons, hence the name of your network. That being said, I'm giving this one an exception.

I don't care if it's a live-action series by Bruce Timm or Brad Bird. It's called "Cartoon Network" and should only show animated programming. This could be like the fall of MTV when they stopped playing music videos and changed all of their programming to reality shows, game shows, and series.

At least they haven't changed their name to something as lame as "Sy Fy" yet...

I want to see this do well for two reasons:

Maybe if this show goes well, we'll see the other two networks try something similar. It would be nice if Nick and Disney thought kids could comprehend something that isn't comedic.

It still seems funny to me that a network called "cartoon" would have live-action programming.

I'm still not sure about it...

And personally, I really miss
"Foster's Home For Imaginary Friends"

Though I guess its a good thing when a show ends before it becomes tired and jumps the shark.