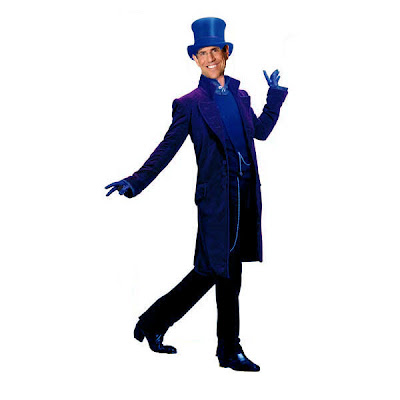 Tomorrow morning we get a look at what Rich Ross has in store for the Mouse in film...

That's when he has a press gathering to talk about the future of films at Walt Disney Pictures. We'll finally get a look at some of the ideas he has decided to move forward with (hopefully greenlighting a few). I for one will be interested in how much he diverts from Dick Cook's plans for the company. Will he go more comedy? Less Action? Another internally developed property (Jungle Cruise, Swiss Family Robinson, ect.)?

It's going to be interesting to see what he's got up his sleeve. Cook was a master showman at these events and added a great deal of theatrical spectacle to these presentations. Ross is a rookie at this part. We finally get to measure him up. Of course, we won't be able to take him to task until several of the projects he finally approves arrive at the box office. Then it'll be up to the audience to decide if Bob Iger made the right choice. But I have one suggestion.

Please don't have are no more comedy movies in this line-up staring Travolta...
Posted by Honor Hunter at 12:34 AM

Robert Downey Jr., Disney, and Wizard of Oz? Oh my!

I really, really hope that they get back to family movies... It was incredibly sad to hear my mother said (after seeing Nanny McPhee and the Big Bang): "What happened to Disney? I loved it when they made this kind of movies."
I mean, we've only been getting "popular" movies for "teen age boys"... Pirates, Witch Mountain, Tron... Prince of Persia... G-Force...
But I bet it will all change when someone else makes an amazing (and box office record-breaker) family film... (Well, they usually rip off the family film that worked: Gordy, Bedtime Stories...)...

Bedtime Stories was a dud.

Don't expect to see them make anymore like that.

so when is this press gathering supposed to happen? Can't find any info anywhere. Is it friday morning?

The press meeting was scheduled for Thursday, don't know what was announced or if it was postponed. I am out of Blue Sky Headquarters, up north right now and haven't heard from sources as of yet.

Will report more when reports of what Ross did/didn't say. Or if it was moved/rescheduled.