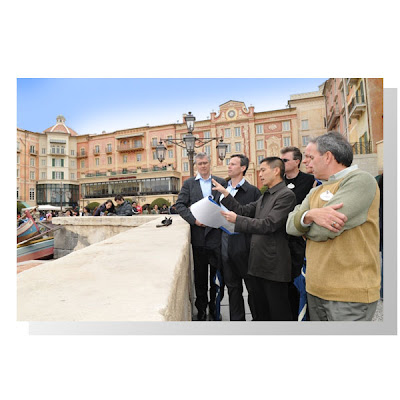 The head of Walt Disney Parks and Resorts, Tom Staggs, has been on a world tour of all the Disney Parks...

I wonder what he thought when he showed up at Tokyo DisneySEA? An amazing contrast to what he saw at the construction pit that has become DCA. I'll let you write the captions. But I must say, I'm quite impressed with Tom from the last few months. I've met him, informally last year and he's far more approachable than Jay. I also think he will/could bring a better perspective on the park(s) with those boys of his. Let's cross our fingers that he brings a positive perspective to world building (WDI style) and the future additions.

And let's be happy that Rasulo is focusing on cold, hard and soulless number crunching which seem to be right up his alley...
Posted by Honor Hunter at 10:20 AM

Its cool that he has been able to get around so much.

I'm looking forward to seeing what the Parks and Resorts has up its sleeve for the Expo next year.

Hopefully if he got a true look at the park, it'll inspire him to approve those kinds of lavish creations here in the states.

Depends on what kind of guy he is.

If he arrived at Tokyo DisneySea and tug at his collar and thought, "Damn, we can't let those fat Americans find out about this place!" he's probably not a guy to cheer for...

But it's true that he doesn't look as soulless as Rasulo.

He looks like he is thinking "where is the MaliBoomer attraction in this park?!" ;-)

"But it's true that he doesn't look as soulless as Rasulo."