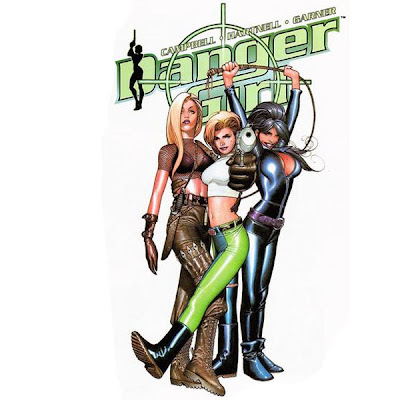 And yet another comic book property I mentioned in my "Without Tights" post is being primed for an adaptation...

Sigh. Someone in Tinsel Town really should hire me as head of development, because another comic I mentioned in that post is now coming to the screen. That doesn't leave much left. It's funny, that post was just a year or so ago and almost every property is now in some form of development. Some will get made, others will undoubtedly fall back into Development Hell, but soooo many are in development now. I was actually working on a second Without Tights post when Disney bought Marvel. At that point it was moot to publish simply because there was no need for them to get the rights to those comics now that they had 5000+ characters to exploit.

Well now comes word that producer Adrian Askarieh is going to have Todd Lincoln direct an adaption of "Danger Girl" for his production company. He's also got several other properties (comics/video games) in the pipeline as well, but the LA Times Entertainment Blog has an article asking him about this production. Take a look at it and expect more, much more in terms of comic adaptions over the next few years.

Not just from Disney, but every studio in Hollywood...

I wish someone would put you in charge of their development too, Honor.

You have great taste.

As usual with these kinds of adaptations, the casting could ruin the whole thing, let's hope for the best.

Oh yay. More superhero movies. And not the classics either, but the lesser, bargain-basement, little-heard-of (and for good reason) heroes.

Yeppers, the new Disney company sure knows how to spend its money wisely.

You know that April Fool's story you posted about Iger dropping "Walt" from the company name? I'm all for it. In fact, "Disney" should be dropped too, because that sacred name should not be associated with the bloated profit-obsessed crap factory Walt's company has become.

Danger Girl is not a superhero comic. It's a James Bond type adventure with a lot of scantily clad women and tongue-in-check humor.

And just because you've never heard of the comic, doesn't mean it isn't a good one. Comics are an unappreciated art form in our society.

Oh yay. More superhero movies. And not the classics either, but the lesser, bargain-basement, little-heard-of (and for good reason) heroes.

At that pretty much constitutes around 98% of Disney's new Marvel character catalog, what would you expect?