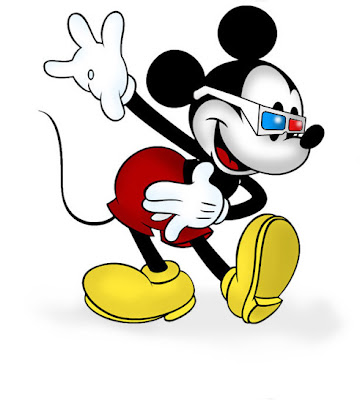 It seems like the Mouse is about to sign a deal along with other major studios with American theater chains to heavily invest in 3-D technology...

All the studios have growing slates of films that are being planned for this technology and Hollywood wants to make sure audiences will be able to experience a showing of these films in the right environment. Disney and Paramount are about to join 20th Century fox in an investment deal with Digital Cinema Implementation Partners, a consortium made up of the AMC, Regal and Cinemark theater chains. Be kinda hard to watch "Toy Story 3", "A Christmas Carol", "Alice in Wonderland", "The Bow and the Bear" and possibly "Prince of Persia" without those glasses handy, eh?

Hollywood is banking on this as the next big thing for event films. The film industry has a track record of doing things like this... Back in the early days of film making studios added sound to get more people watching the silver screens in the 30's and widescreen (or CinemaScope) was to created so as to keep people coming to theaters when television started competing with the local movie houses. Now that televisions have HD, televisions have the same aspect ratio(screen shape) as motion pictures and home audio systems are getting as good as professional chains, the industry has to do something to keep butts in the seats. This may be it. Iger, Katzenberg and a few others think it is... and it might. I, for one, just don't like wearing glasses while watching a film... or theme park rides for that matter.

Time will tell.
Posted by Honor Hunter at 11:22 PM

I'm against every major movie being in Digital 3D. I don't mind it occasionally, but all the time it would get old. The Digital 3d technology isn't as phenomenal as some think, and this is coming from someone who's seen Nightmare before Christmas, Meet the Robinsons, Beowulf, and Journey to the Center of the Earth in 3D. Let's remember that it wasn't Jaws 3D and Amityville 3D that made the 80s the best decade for blockbusters. It was the old fashioned 2D films like Raiders, Back to the Future, and The Empire Strikes Back.

I like digital 3D, except for the luminance. Generally, they seem about half-as-bright as a normal movie going experience. Very dark or subtle scenes can be very hard to watch, or muddly. Since the brightness is being divided between two frames, I suppose that makes sense . . . or maybe it's just me. I'd love to see a bright, vivid 3D movie . . . and in this age of digital protection, you almost always have a 2d option--and will have a 2d option--for any 3d movie. Toy Story 3D will be playing in 2D in a lot of theaters. There are folks who can't handle the glasses, folks with poor depth perception or people like me who, frankly, get tired of the half-brightness I always experience at local cinemas when watching 3d movies.


But, still. I love 3d movies. I've heard great things about 3d IMAX, but I have never seen it. But I can't wait for more 3d films . . .
I'd love to see older classics get the 3d treatment. I'd go see the Star Wars Original Trilogy 3D-ified in a hearbeat. I'd go see Raiders of the Lost Ark, with the 3D treatment, or the 1978 Superman, 3D enhanced, in a minute. But maybe that's just me.

Oh, and Back To the Future? I'd see that if they did a theatrical re-release, period, but in 3D? I'd be in heaven. Also the original Tron. 3D and slap it in a theater, I'd be as happy as could be.


Sorry, I have no interest in Fly Me To the Moon.