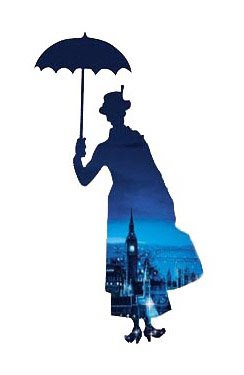 Forty-four years ago today, Walt Disney's "Mary Poppins" premiered at Grauman's Chinese Theatre in Hollywood in a most delightful way. It will be released to the general public in two days...

The film would go on to win Academy Awards for Best Actress, Best Film Editing, Best Original Score, Best Song, Best Special Visual Effect and make a star out of a lovely, talented lady named Julie Andrews.
Posted by Honor Hunter at 7:08 AM

A classic. I've loved this movie since I was a child.

Robert B. and Robert M. wrote the perfect musical numbers for this movie. Just brilliant.

David Tomlinson was brilliant as Mr. Banks. Spot-on casting. Great lines. Beautifully written and acted. Also, the very attractive Glynis Johns as Mrs. Banks didn't hurt either. Cameo by Disney stalwart Ed Wynn. There is just so much to love about this movie.

A brilliant E-Ticket ride based around(or a resort completely themed on) Mary Poppins would definitely get my attendance. Just saying.

I agree, it's a wonderful movie that has held up beautifully, and yet it's criminal the way it's been ignored by the theme parks. I saw someone dressed up like Mary at WDW last time I was there, but that's about all there is Poppins-wise. I think a Mary Poppins dark ride would be, well, supercalifragilisticexpialidocious!

I think Mary Poppins Resort at Disney world would be great. you could place it between the Contemporary Hotel and the ticket and transportation center. The layout could be the streets of London with check in area the street layout from the movie and the park the kids lose the kite in. It would have a great feel like you were in England at the same time the movie was set.

It's brilliant. I'd love it (who wouldn't?). Theme the lobby on the Fidelity Fiduciary Bank. The rooms decorated like the Bank's house. A central garden area themed on the park. Little areas around the hotel with scenes from the movie. Instrumental music playing in the background from the Sherman Brothers score.

It's a highly underused Disney property, when it comes to loding and the theme parks.